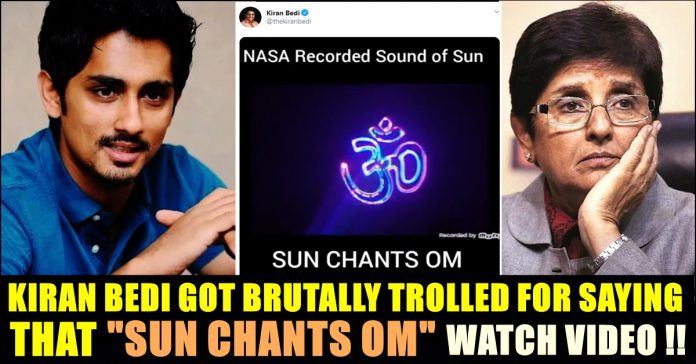 Kiran Bedi, current Lieutenant governor of Puducherry, a retired Indian police service officer, social activist and former tennis player shared a bizarre video and said that “Sun is chanting Om”. Users of social media found it as fake as soon as it got surfaced in her official twitter account’s timeline.

The nearly two minute long video contains a loud sound of Hindu holy chant “Om”. Followed by the sound, a computer voice claims, “In 6th century BC, Pythagoras also heard the sound of the sun and described it as a deep, resonant hum… How did the ancient Hindus know this ancient mantra if it could not be heard by the human ear?..” the voice ends abruptly. The video ends with a picture of Lord Shiva.

Sharing the video, Kiran Bedi added a caption saying “NASA recorded sound of sun, SUN CHANTS OM” in the video. Check out her post below :

Netizens labelled this video from Kiran Bedi as a fake whatsapp forward and started trolling it without mercy. However, she didn’t delete it yet. Tamil Actor Siddharth who is known for voicing out against Modi government trolled this post of Kiran Bedi by sharing it with a caption “Sun-ghee from whatsapp.”

The original sound of sun is available in Internet with a quick Google search. The below video has solar sounds generated from 40 days of the Solar and Heliospheric Observatory’s (SOHO) Michelson Doppler Imager (MDI) data and processed by A. Kosovichev.

Internet users didn’t miss this chance to troll Kiran Bedi. So far, the tweet of Kiran Bedi attracted as many as 17,000 likes and more than 5,000 shares. Check out some of the reactions below :

Once upon a time this lady was a hero to many. What a disgrace now!

And we thought u were intelligent

I am a hindu. I consider this tweet by you as one of the best joke of the millennium . Saffron brigade is successful in brainwashing learned people like you . Both The elite and people without basic knowledge🤣🤣😁😁

Comment your views on this video shared by Kiran Bedi !!