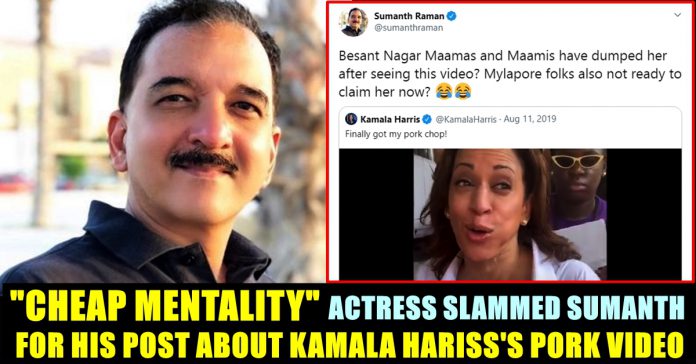 Popular television anchor and Political Analyst Sumanth Raman who is pretty much vocal in social media platforms about his political views, shared an old tweet of Kamala Harris in which she can be seen consuming pork meat and trolled Brahmin community people of Chennai who claimed her identity for her achievement. Among the enormous number of reactions he received from the Twitter users, actress Vanitha Vijayakumar’s grabbed the attention of the Twitter users.

Black Indian-American Kamala Harris, has been selected by Joe Biden as his running mate to take on Donald Trump in the 2020 US presidential election scheduled this November. Democratic Nominee Joe Biden who served as 47th vice president of the United states from 2009-17 made this announcement on Tuesday and Kamala Devi Harris will be the first Black woman and the first person of Indian descent to be nominated for national office by a major party.

The 55 year old woman was born in Oakland, California to Donald. J. Harris and Shyamala Gopalan,a breast-cancer scientist who had emigrated from Chennai, India in 1960 to pursue a doctorate in endocrinology at UC Berkeley. Donald J. Harris, is a Stanford University emeritus professor of economics, who emigrated from British Jamaica in 1961 for graduate study in economics at UC Berkeley.

As soon as Kamala Harris achieved the immense feat, Chennai based social media users has been posting proud tweets alleging that she belongs to Besant Nagar of Chennai whereas the other set of people claimed that she belongs to Adyar and various other people from different areas of Chennai started claiming her identity. However, Kamala Harris brings a unique appeal to the Democratic ticket. Being an Indian origin politician, she identifies herself as an African-American, and has a Jewish husband which surely would attract large and important cross section of US voters.

Meanwhile, Sumanth Raman shared a tweet of Kamala biting a pork meat in front of media and sarcastically said that people who claimed her will deny it after seeing the video. “Besant Nagar Maamas and Maamis have dumped her after seeing this video? Mylapore folks also not ready to claim her now?” his tweet read.

Besant Nagar Maamas and Maamis have dumped her after seeing this video? Mylapore folks also not ready to claim her now? 😂😂 https://t.co/9q1mGq0HCI

Check out some of the reactions for his post :

Former Bigg Boss contestant and actress Vanitha Vijayakumar, condemned this tweet of Sumanth saying that what she eats and what she wears won’t stop her from being a good leader.

If her choice of eating what she enjoys stops her from being a good leader and office bearer …then some people can go to hell..its our life and our choice to eat or wear what we want …cheap mentality https://t.co/QUsTz2LYc3

“I studied in psbb..I know so many Tamil brahmins who eat non veg..they have evolved” she wrote in her next tweet while replying to one of her follower.

I studied in psbb..I know so many Tamil brahmins who eat non veg..they have evolved https://t.co/Ux9sz650WO

Asal Kolaar who came under scanner for the way he behaves around female contestants of the ongoing season of Bigg Boss show, is once...