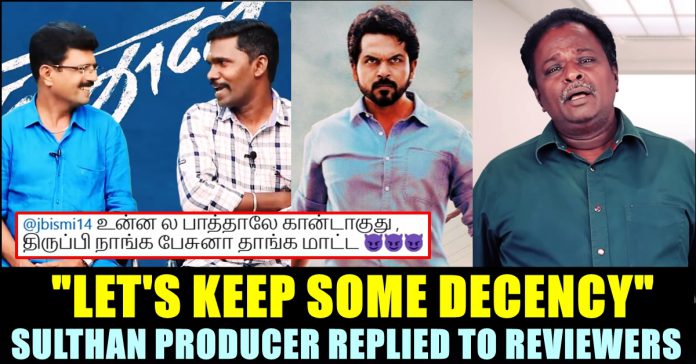 Karthi’s most awaited film “Sulthan” directed by Bakkiyaraj Kannan released on 2nd of April. The film released in the theatres of Tamil and Telugu states and is receiving various kind of reactions from the fans and critics. Produced by S. R. Prakash Babu and S. R. Prabhu under the banner Dream Warrior Pictures, the film has Rashmika Mandanna, Napolean, Lal, Yogi Babu and others. After one day of the film’s release, S.R Prabhu came up with a tweet sending a message to the reviewers who gave harsh criticism for the movie in an inappropriate way.

The film’s plot revolves around a protagonist who wants to reform a group of hardened criminals who are working for his father. When the responsibility on taking care of the 100 criminals falls on the shoulder of the protagonist after his father’s demise, he attempts to transform them into civilized people. He also saves the lands of farmers from a corporate company owner.

Among the reviews that surfaced for the film, many fans said that they loved the film for the theatre experience it gave. However, a number of reviews harshly criticizing film also emerged in social media platforms. On seeing the reviews, producer SR Prabhu came up with a tweet thanking the reviewers who supported the film. The producer also sent a message to the reviewers who used wrong choice of words while reviewing the film.

On seeing the tweet, many of his followers mentioned movie journalist Bismi in the comment section as he reviewed the film in his youtube channel Valaipechu along with his fellow journalists. Some of them also believed that the tweet was intended for popular movie reviewer “Blue satta” Maaran who trolled the film while reviewing it.

Bismi and co said that the film disappointed them in big time and questioned how a producer like SR Prabhu who produced “Aruvi” kind of films accepted to make “Sulthan” after hearing the story of it. They also expressed their dejection over Karthi and Rashmika Mandanna for the way they acted in the film. Making job opportunity for 100 plus junior artists is the only positive of the film, they said in their review.

Blue satta “Maaran” said that the film is a failed version of Akira Kurasowa’s “Seven Samurai” and alleged that the makers have plagiarised many films including “Thevar Magan” and “Bhoomi” to make the film. He criticized the corporate villain role and said that the film deserves to be released in OTT instead of theatres.

Despite of the limited positive reviews, many other reviews criticizing the film also released in the Internet. Reacting to the reviewers who used inappropriate words while reviewing the film, producer SR Prabhu said that they need to keep some decency in their choice of words by adding that cinema and audience are bringing food to their plates.

“Many of our films have been supported by reviewers. I am always thankful to them. Few may have other opinions about #Sulthan. I value that. But let’s keep some decency in our choice of words. After all it is CINEMA and AUDIENCE who bring food to (y)our plates! #SulthanReview” read the tweet of the filmmaker.

Many of our films have been supported by reviewers. I am always thankful to them. Few may have other opinions about #Sulthan. I value that. But let’s keep some decency in our choice of words. After all it is CINEMA and AUDIENCE who bring food to (y)our plates! #SulthanReview

A tweet uploaded by former Bigg Boss contestant Balaji Murugadoss about mixing politics and entertainment is being widely shared with many speculating that the...