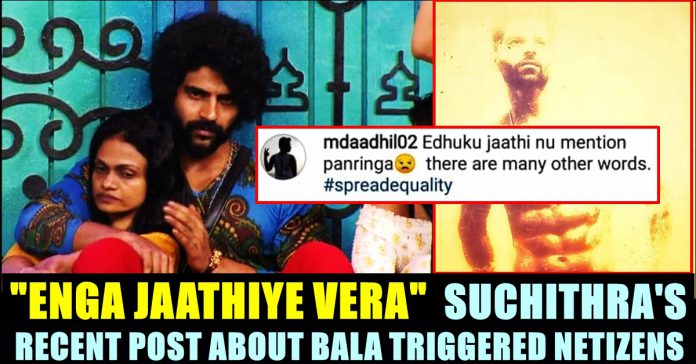 Radio jockey and playback singer Suchithra had a special bonding with her co-contestant Balaji Murugadoss inside the Bigg Boss house. Even after getting eliminated from the show, she has been exhibiting her affection towards him through her social media posts. A recent post she uploaded to express her support towards Balaji has triggered Netizens to raise various kind of questions. Suchithra who would turn off her comments section usually, surprisingly replied to many of the comments that were surfaced.

Suchithra who entered the house as a “wildcard entrant”, spent three weeks in the Bigg Boss house. While getting evicted, Suchithra said to Kamal Haasan that her father appeared in her dreams and told her to get out of the house as nothing about her were telecasted. She also expressed her fear of mass trolls and criticisms in social media. Comparing to other contestants, Suchithra had a short span of time to grab a spot in the hearts of the audience and failed to do it. Suchithra got nominated for the eviction with 9 votes from the housemates.

Now, after coming out of the Bigg Boss house, Suchithra is pretty much active in social media platforms. Most recently, she uploaded a picture of Balaji and wrote “Enga Jaadhiye vera.. Nandri Vanakkam” as her caption which is literally translated as “Our caste is different.. Thanks greetings”

This post of the playback singer triggered her followers to raise various kind of questions. A follower asked Suchi why she is dragging caste into this and she replied to him saying that it is the only word that fits. “Jaathiya epdi saar maatha mudiyum. adhu engeyo oru single poramaipudichavan kallula sedhukkina kanakku. Don’t see it as wrong. Just ascribe it a new meaning. I always proudly say “I’m Drav jaathi” #Drav is #Dravidian. I also often say I’m #YaanaiParambarai ciz that’s true too” she replied further.

However, Suchi deleted the post due to unknown reasons and uploaded a new one with a different caption. “AdonisCreed🔥#balajimurugadoss #biggbosstamil #biggbosstamil4 #balajiarmy pic edited by yours truly 💖🥇🏆 #DontBeOffensive” her caption read.

Check out the screenshot of her new post below :

Earlier, days after getting out of the Bigg Boss house, Suchi uploaded a picture of Balaji crying and wrote “The face that cannot fake anything #BalajiMurugadoss #Balajiarmy #BiggBossTamil4 #thesadtruth #theunseentruth” as her caption.

During her stint in Bigg Boss house, Suchithra always stood for Balaji Murugadoss while he was facing issues with the other contestants. During her final conversation with Kamal Haasan before walking out of the show, Suchi said that Bigg Boss is her most favourite show and added that she entered the house as a fan girl. The radio jockey also said that she wanted to get her singing career back by participating in the show.

KL Rahul's terrible form continued as he got out for a duck in the third T20 between India and England. Entire Internet came up...