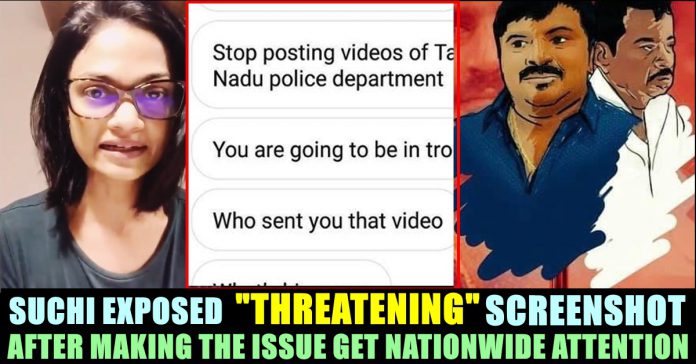 Singer Suchi whose video on Sathankulam lockup murder case helped the issue to get global wide attention, has reported about getting threatened for raising voice against the Police officers of Tamil nadu state. Followed by Kollywood celebrities, the horrific lock up death of Jayaram and Bennix in Sathankulam of Thoothukudi made people across the country to mourn and react in a furious way. Days after the report on the custodial death of the father and son duo surfaced, known faces and influential personalities across the country who are having huge number of followers for their official social media accounts, started raising their voice. They requested public to join hands together to seek justice for the injustice took place. The main reason behind the wide attention is a video made by singer Suchithra who narrated the whole incident in English language, to make everyone in the country aware of the issue.

Actress Priyanka Chopra who currently works for hollywood film industry, condemned the act of the police officers and said “No human deserves such brutality, whatever be their crime.” only after seeing the video posted by Suchithra. Many other celebrities including Shikar Dhawan, Harbhajan Singh, Taapsee, Rakul Preet reacted to the issue after her video went viral.

This is heartbreaking .I am disgusted. This kind of brutality is inhuman and no one has the right to treat another life in this manner .Makes me sick to the stomach. Strength to the family members of the deceased .This should not be tolerated. I demand #JusticeforJayarajAndFenix https://t.co/pPwC2ME8Vr

Now, the radio jockey came up with a tweet exposing a screenshot of the messages received by one of her followers. In the screenshot, we could see an anonymous person making “severe warning” to a follower of Suchi by saying that he will be in trouble if he supports her.

“Msgs like this are being sent to all my Instagram followers guys, what can I say – please retweet” Suchi wrote while sharing the screenshot.

Msgs like this are being sent to all my Instagram followers guys 🤦🏻‍♀️ what can I say – please retweet 🙏🏻 pic.twitter.com/TmI8AlpbEE

Many of her followers supported her for her bold move of making a video out of the issue without thinking about the consequences in the comment sections and asked her not to give up.

Stay safe and please don't give up, because if you, it has reached a step ahead and keep posting about the issue in English.. Thank you so much.. We are eagerly waiting for the death sentence for the culprit.. Then only we feel calm..

He is following two ppl, you and Capt. Dharmveer. Seems like it was created just to threaten you. Stay safe Suchi ♥️

If a person like me who belongs to Hyderabad supports u then what will they do ?????

Sathankulam murder case has been transferred to CB CID and the officers are currently investigating the family members of Jayaraj and Bennix. Earlier, Magistrate Bharathi Dasan who went to Sathankulam police station along with other judges, said that the cops haven’t cooperated instead they destroyed evidences and abused them. However, head constable Revathi who was present in the station during Jayaraj and Bennix were tortured, accepted to be a witness only after getting an assurance to be protected (by the police) from the accused (also police).

Previous articleCheck How These Top Tamil Tik Tokers Reacted To the Ban !!
Next articleDirector Made Fun Of Rajinikanth’s Tweet On Sathankulam Issue !!

The two catches dropped by Kohli costed the match for Royal Challengers Bangalore. The Indian captain himself accepted that he should have led from...