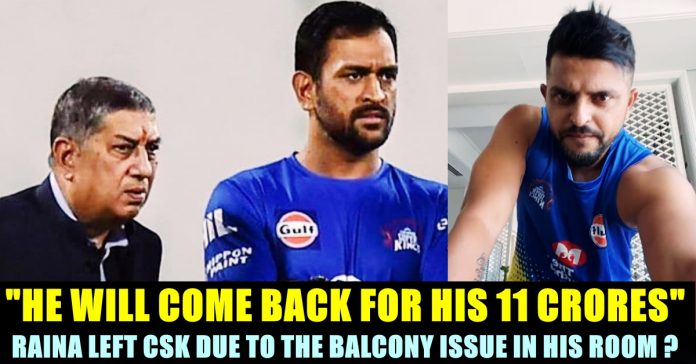 While media outlets and public believed that Raina left CSK and reacted due to the assault in his uncle’s home, a shocking new update emerged saying that the cricketer left UAE after having a rift with the team management for not providing him a proper hotel room that he demanded. It was widely believed that the cricketer left to look after his extended family and to see his children after knowing about the team members positive COVID 19 result.

On friday, the official twitter account of Chennai Super Kings posted a tweet saying “Suresh Raina has returned to India for personal reasons and will be unavailable for the remainder of the IPL season. Chennai Super Kings offers complete support to Suresh and his family during this time.” to update about the player’s departure.

Followed by the tweet, reports said that Raina’s uncle has died due to a midnight attack in their Pathankot’s Thariyal village while his aunt is critical. The report also mentioned that the attack was carried out on the night of 19th of August when the family was sleeping on the terrace of their house. It was believed that Raina left to look after them.

Now, the report of Outlook India has said that the left hand batsman left the team after having a rift with CSK captain and his best friend MS Dhoni. The report has said that Raina was unhappy since the day Chennai Super Kings landed in Dubai on August 21. The 33 year old cricketer was finding the stiff protocols of the bio-bubble claustrophobic and demanded a similar room that was Dhoni facilitated with.

When the CSK team quarantined itself in the team hotel, the issue with “Raina’s room not having proper balconies” became a flashpoint, according to the report. Even Dhoni couldn’t pacify Raina who played under him for almost all his career and things spun out of control”, the report suggests.

After 13 member of CSK team tested positive and isolated, Raina’s fears only grew. “Cricketers are like prima donnas (a very temperamental person with an inflated view of their own talent or importance), like the actors of olden days. Chennai Super Kings have always been like family and all senior players have learnt to co-exist” said Srinivasan, owner of CSK and former BCCI president. “CSK was quickly trying to get over the Raina episode” he added.

“My thinking is that if you are reluctant or not happy, go back. I don’t force anyone to do anything. Sometimes success gets into your head” the CSK owner said.

Srinivasan also shared about his conversation with MS Dhoni. “I spoke to Dhoni and he has assured me that even if the numbers goes up. there is nothing to worry. He spoke to the players through zoom call and asked them to remain safe. You really don’t know who is a passive carrier” Srinivasan said. “I have a solid captain. Dhoni is simply unfazed by anything. That is giving everyone in the team a lot of confidence” he said.

Srinivasan went on to state that Raina’s exit would give opportunity to Ruturaj Gaikwad. “He is an outstanding batsman and will get chance now. He can become the star of the show. Who knows ? he said to the Outlook.

Watch the video Raina posted 7 days ago from Dubai :

Dubai Life ! Waking up to this skyline of Dubai #uae @mydubai

Srinivasan also believed that the vice captain of the CSK team would make a return as the season is yet to start. “Raina will realise what he is missing and certainly all the money he is going to lose: he reportedly said. It is notable that raina is getting Rs.11 crore per season to play for the yellow team.

As soon as the news broke out on the Internet, netizens started reacting to it in various. One of a Twitter user compared the scenario with a popular Vadivelu comedy.

Previous articlePeople Who Mocked Chadwick Boseman’s Looks Are Getting Thrashed !!
Next articleShivani Narayanan Gave Back To VJ Chithu In Her Own Style ??

Director Mohan G who directed "Draupathy" revealed that no channel showed interest to buy his low budget film which turned out to be one...