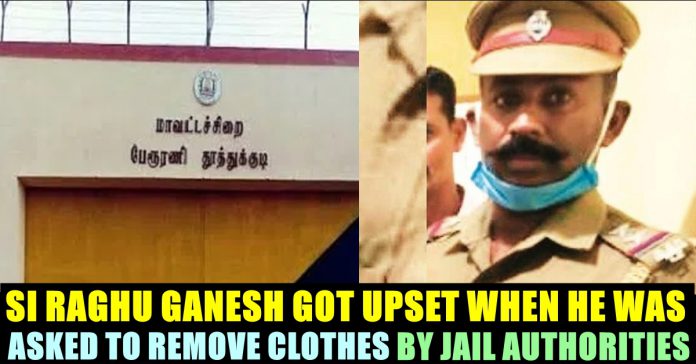 Reports on the routine of arrested police officials in Thoothukudi jail regarding the Sathankulam double murder case has emerged. Sub-Inspector Raghu Ganesh got extremely upset when he was asked to remove his clothes by jail authorities. Four police officers linked to Sathankulam lockup murder have been arrested under Section 302 of Indian Penal Code. Sub-inspector Raghu Ganesh was the first one to get arrested regarding the case. The three others which includes sub inspector Bala Krishnan and constables Murugan and Muthuraj. Later, the CB CID included the name of Inspector Sridhar and arrested him near Kovilpatti according to reports.

Now, all the police officers who are locked up in Peroorani’s jail in Thoothukudi district, seemed upset over the jail circumstance, reports suggests. Among the five arrested police officials, Raghu Ganesh was the first one who went to jail on the day he was produced in court. Before sending him to his cell, jail authorities checked his entire body. As per the procedure, they asked Raghu Ganesh to remove all his clothes to check whether he has any kind of wounds in his body. Raghu Ganesh was visibly upset when he was asked to strip, says reports.

Inspector Sridhar, Sub Inspector Bala Krishnan and Constable Murugan were sent to the same jail, the next day. After seeing them, Raghu Ganesh had his sigh of relief and started behaving normal, said reports. On 3rd July, the prisoners of Peroorani jail were served Kanji and Pulithuvayal. Though other police officers couldn’t eat their food well, Inspector Sridhar ate well. For lunch, the prisoners were provided Rice and Sambhar with a vegetable mix as side dish. Inspector Sridhar reportedly asked “Only one kind of vegetable mix is available for side dish?” and ate well.

They could be able to communicate with each other only during bath time and during food intervals. All four of them communicated with each other while bathing and eating on 3rd of June. However, Madurai D.I.G Pazhani has ordered officials to keep an eye on them. Jail authorities are not communicating with these four unnecessarily and no special offers were provided to them. Four of them were locked up in separate rooms added Vikatan report.