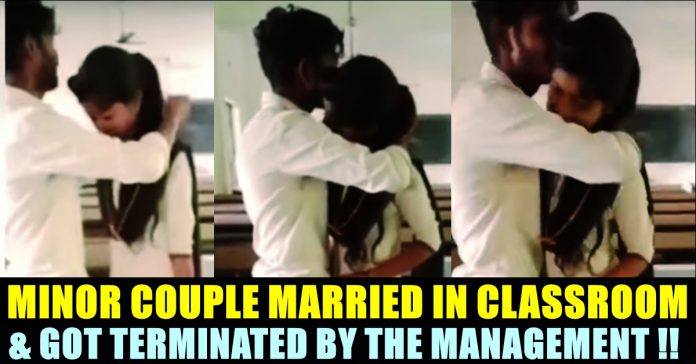 In Rajahmundry Junior college that is located in East Godavari district in Andhra Pradesh, a shocking incident of minor students getting married had took place. The two students were studying intermediate and got married in the classroom, video of which is doing rounds in social media platforms. The video shows the duo involving in the act of tying knot and keeping bindi which are the practices widely followed in a Hindu marriage.

The incident took place on 17th of November month and the matter came to light only after the principal of the educational firm provided TC (Transfer certificate) to both the students.

The management had started the college as the students who are living in the village found it difficult to attend the online class. Thus, these two students married in a classroom. The boy, in the fear of the girl’s family members not accepting their relationship, tied knot in the girl’s neck, according to reports. The marriage took place in the presence of their two boyfriends.

The school management had made the decision of removing the duo from the college as they are still minors. The girl who shot the video on her mobile phone had been suspended, according to reports. However, the duo tried to defend their act by saying that it is a rehearsal done for a short film and apologized to the management. However, their termination remained the same.

According to Indiaglitz, their conversation which was recorded in the video had proved that they did it for real and not for rehearsal. The girl’s father, after knowing about the incident, had blamed the college management for letting students commit such unlawful act inside the college campus. A report says that the family of the girl was aware of the duo’s relationship and hadn’t taken them seriously enough as they are just 18.

How Much Tax Was Actually Demanded From Actor Vijay ?? WATCH

Details on the actual price and tax demanded for the car bought by actor Vijay in the year 2012 were out in media. It...