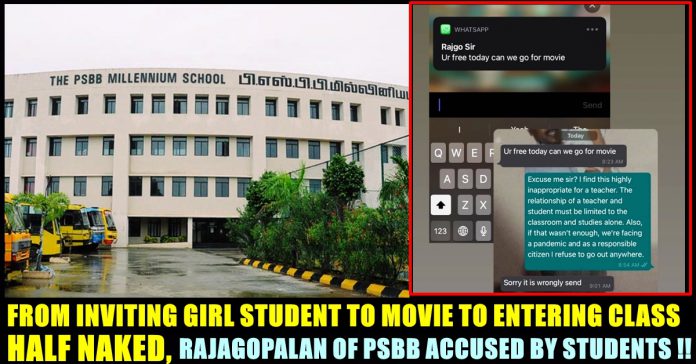 Since the morning of Sunday, several social media posts, screen shots, Instagram stories, write ups has been surfacing in Internet, calling out the faculties of Padma Seshadri Bala Bhavan group of schools which is located in Chennai for their inappropriate behaviour with the students, especially towards the female ones. A document was created for the alumni of PSBB to sign in order to take actions against Mr. Rajagopalan whose conduct, reportedly affected many female students. He passed obscene comments at female students, invited one of them to go movie with him, visited class by wearing towel and was involved in several other insensitive acts that disturb students mentally.

Singer cum MeToo activist Chinmayi raised voice supporting the former students and shared a post in her official twitter account which helped the issue to blew up. DMK Leader Kanimozhi, movie producer Archana Kalpathi has also reacted to the issue through their respective social media accounts along with the public. Former radio jockey and Bigg Boss participant Vaishnavi shared a traumatic experience about a faculty of the PBSS school moral policing her. It all started with the Instagram stories of a model named Kripali who is currently exposing the faculties of the school through the stories sent to her personally by many former/current students.

Despite of several complaints and petition, the school management reportedly turned a blind eye and the fellow faculties of the harassers would laugh at their gestures, according to a message shared by one of the students. Stories shared by Kripali in Instagram is being shared in other social media platforms such as Twitter, Facebook with many other victims of the school faculties coming forward narrating their ordeal.

Hashtag “PSBB” is currently trending in the micro blogging social media site. “I have been asked to share this. A staff member PSBB KK Nagar Branch and the screenshots of him coming in a towel wrapped around his waist to class (!!) to watching porn in class. Model Kripali Samdaria has collated all accounts on Instagram here.” Chinmayi said in her tweet and went on to write “To the students at PSBB – if you are being coerced or threatened to remove your testimonies, please don’t. You’ll receive legal help. Also – students usually don’t know what is appropriate and what’s not. That education never reaches them. So kindly refrain from shaming.”

To the students at PSBB – if you are being coerced or threatened to remove your testimonies, please don’t. You’ll receive legal help.
Also – students usually don’t know what is appropriate and what’s not. That education never reaches them. So kindly refrain from shaming.

Here’s the screen shot of staff Rajagopalan inviting a student for movie and saying that it was wrongly sent after the student condemned him.

The student who received the message , said that Rajagopalan refused to accept her accountancy project and approved it after making her beg like others. After signing it, Rajagopalan sent the movie message and made her call him right away after seeing her reply condemning him. He reportedly said that it was wrongly sent message by adding “I treat you like my daughter, do you think I’d do this ? No so please delete the message”

Here’s the screen shot of the message sent by the student to Kripali :

Check out some of the screen shots and tweets that are flooding the social media against Rajagopalan and other PSBB faculties :

inappropriately for god knows how many years now. The situation just got worse with online classes, as apparently he attends classes half naked, late night video calling, and asking girls out for a movie. The worst part is despite several complaints from students

These horrific instances have surfaced now via Kripali’s Instagram stories. Here’s the link to her profile if you want to read the horrifying personal accounts of soo many students https://t.co/ZSUvaT7ggh#PSBB must be held accountable. S

@Anbil_Mahesh @tnpoliceoffl pls take action on this pedophile and the institute ASAP.

Sexual harassment cannot be normalised It was heartbreaking to see stories about this commerce teacher in #PSBB As alumni we have to amplify so it reaches the right people to take severe action This is not Ok !Love and hugs to all the brave girls who have shared their stories ♥️

TW: stories of sexual harassment. Rajagopalan, commerce teacher in #PSBB(KKN) is a sexual harasser. Posting this after I have personally verified this with a student from this man’s class. Also posting this to amplify and ensure he gets the punishment he deserves. This is sick. https://t.co/ndJIKrOmN5

Attaching the screenshots of victims & the conversation. It’s the commerce teacher & PT teacher of #PSBB School. And so many more. @tnpoliceoffl @chennaipolice_ pic.twitter.com/4lzmqLrwac

The allegations of sexual harrasment at Chennai – KK Nagar #PSBB school by a teacher no less are horrifying and grave. This perpetrator must be held accountable and strict legal action should be taken against him. The School authorities,
1/3

Sad that Schools aren’t safe for the students. The trauma these girls went trough at this age is unforgivable. Please take necessary action on these predators @Anbil_Mahesh #PSBB pic.twitter.com/VPSYDMsLhs

I remember the time I went to PSBB for culturals and one of the teachers from PSBB asked me what my name was, and when I told her, she said “You’re a brahmin right? Why aren’t you wearing a pottu?”

Previous articleYouth Wants To Become A “Chair” For This Kollywood Actress !! Here’s Her Reply
Next articleY. G. Mahendran Sent Mail To The Authorities Of PSBB !!

A viral video that shows a teenage boy tying mangalsutra to a a girl who was wearing a school uniform is going viral in...