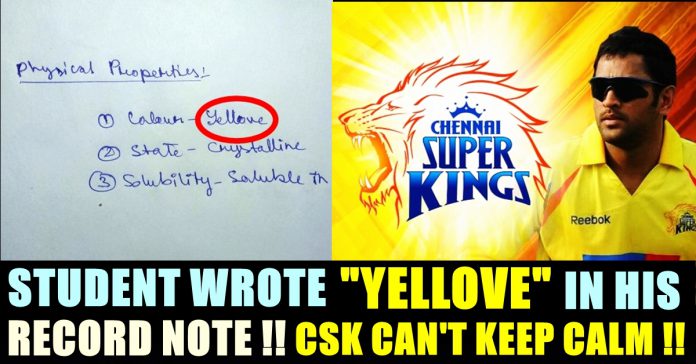 There is more than 100 days left for the most awaited thirteenth edition of Indian Premier League but fans are already in the mood it seems. It is very well known that IPL is the most watched Twenty 20 league in the world. Fans of the respective teams of the tournament are already started fighting with each other in social media platforms.

Meanwhile an ardent fan of Chennai Super Kings who is a student, has tagged the official account of the team and explained how closely he is attached to the team. Chennai Super Kings team is one of the most loved franchise in Indian Premiere League tournament. The team not only loved by the fans who belong to Tamilnadu but also by the fans across the world. The reason behind it is nothing but the captain who leads the team since the inaugural season of IPL.

After serving a two-year suspension from the IPL starting July 2015 for the alleged involvement of their owners in the 2013 IPL betting case (along with Rajasthan Royals), the Super Kings returned to the league in 2018, winning the championship in the comeback season, its third overall to tie Mumbai Indians for the record for most IPL title wins. In the last season, the team went to finals and lost to Mumbai Indians in the final ball.

The social media account of Chennai Super Kings is very famous for their witty replies to the opponent teams and its fans. The account which is active throughout the year, would reply to everything that is related to Chennai Super Kings.

Now the student whose twitter handle name is Abhigyan, while writing the rough copy of his chemistry lab note, wrote “Yellove” instead of “Yellow”. Sharing the incident, Abhigyan wrote “I was writing the rough copy of my chemistry laboratory notebook and I wrote #Yellove instead of Yellow by mistake 😅 I thought of not submitting this page but now I am going to submit this as it is.😁 (I am going to write #WhistlePodu instead of White Residue 😛)”

I thought of not submitting this page but now I am going to submit this as it is.😁
(I am going to write #WhistlePodu instead of White Residue 😛)@ChennaiIPL pic.twitter.com/IKkpnrWRld

On seeing this post, Chennai Super Kings wrote “Hahaha. Hope you get a #Super invigilator! 🦁💛”

Hahaha. Hope you get a #Super invigilator! 🦁💛 https://t.co/Pw9eCV4nee

However the best is yet to come from the twitter handle of the successful IPL franchise. On seeing this reply, one of a user asked “What if the invigilator was a MI fan 😄?”

To this comment CSK said that he/she will give extra marks for writing the exam in blue as it is the color of their jersey.

Extra marks for writing the entire thing in blue.

Comment your views on this epic way of handling the followers !!

Previous articleBigg Boss Celebrity Forced By Fans To Announce About Her Pregnancy !!
Next article“He Misbehaved With My Daughter” Jayashree Accused Her Husband !! WATCH !!

Director Vignesh Shivan replied to comedy actress Harathi's recreation of Nayanthara's marriage makeover and the tweet is receiving various reactions from the users of...