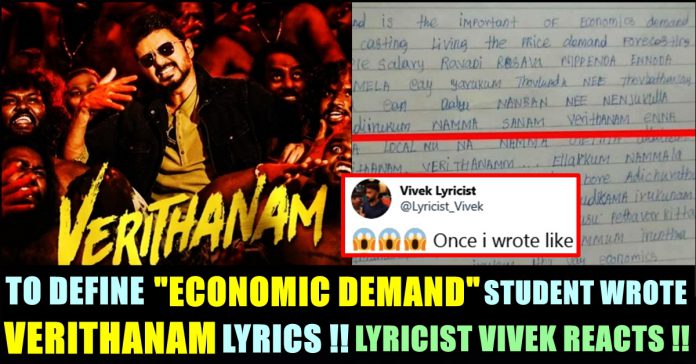 No words could describe the craze level that is being created by Bigil film. Director Atlee, who himself a biggest fan of actor Vijay, carved the actor inch by inch it seems. The most awaited Bigil’s release date announced and left the Internet in explosion. The film which marks the third collaboration of Atlee and Vijay, has actor Vijay in the lead in three different get ups. The film is going to get released on the 25th of October along with Karthi’s “Kaithi”.

The trailer and audio of the film became huge hit in Internet once it got released. The song “Verithanam” in particular, got a new dimension once Vijay sung it in the audio release of his movie. The song being used in many memes and youngsters made it as a “Tik Tok” material.

Now, to an extend, an ardent fan of the song wrote it as an answer to a question in his exam it seems. The guy who wrote the answer was asked to define “Economic Demand”. After few words, he literally wrote the song lyrics of “Verithanam” song which is evident in the picture shared.

Vivek who saw this tweet, immediately replied to it in a humorous way. The Lyricist said that he himself did the same during his academic days. “😱😱😱 Once i wrote like this about sachins innings🤓. Varalaaru nammala mannikave mannikaadhu”

Check out some of the hilarious reactions to this tweet of Vivek :