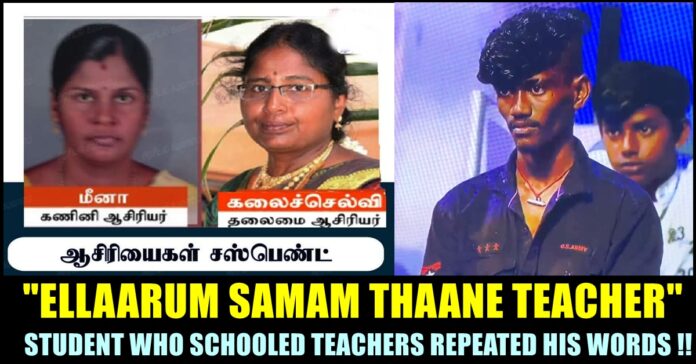 Most lately, an audio conversation between a student and a teacher surfaced in the internet and it was about the latter brainwashing the former by instilling the thoughts on how people should be discriminated through caste. The student, in reply, said “all are same , teacher” and grabbed the attention of the public. He got highly appreciated by the people in the internet and the audio went viral among the social media platforms. Now, the student appeared in the most popular “Neeya Naana” show of Vijay television and repeated the words he uttered in the phone call.

A 11 minute long leaked audio of a female teacher named Kalaiselvi talking about caste to a student and encouraging him to discriminate others based on their caste is going viral in social media platforms as a result of which two female teachers Meena and Kalaiselvi got suspended. The incident happened between the teachers and students in a government school that is located in Kulathur near Vilathikulam, Thoothukudi district.

In the leaked audio, the teacher could be heard saying “Who is majority?? You are Devar and I am Nadar, you know whom they are. Now, the school is going to be in their control. Shall we allow them to take the control?” the teacher asks the student to which he immediately responds “Ellarum Samam Thaane Teacher” (Ain’t we all equal, teacher?)

Further, the teacher insists the student to approach his relatives in order to prevent individuals from a particular caste to become the leader of Parents teacher association. “If they become leaders, people of your place will be denied seats. Where you all will go and study?” the teachers asks the student.

“It will become a school for them and them alone. You know my decisions would be correct, right?? So tell the elders of your town who are interested to take part in the election” the teachers further says to which the student replies “My chithappa is a political party member, I will tell him”

“Notice will be given to you by Headmaster through students. Look at the details and ask the elders of your town to come and talk with HM to take part in the election. I am not a person who discriminate people based on caste but the situation is very bad. Computer teacher said that you are a very good boy. Talk to her for further details” the teacher heard saying.

After the audio went viral, it was reported that teachers Meena and Kalaichelvi were suspended. Now, in a recent show of “Neeya Naana”, the student made his presence and repeated the words he uttered. Host Gopinath pointed out his hairstyle to denote that his mindset is progressive despite his hairstyle being a funky one.

convey my wishes to team too, #NeeyaNaana

A never before seen video of Tamil nadu based Pan Indian actress Samantha rehearsing for the sensational "Oo Soliriya Mama" song got surfaced in...

Warming in the right tune for the upcoming ICC World Cup in the warm-up game against Bangladesh on Tuesday, MS Dhoni was a star...