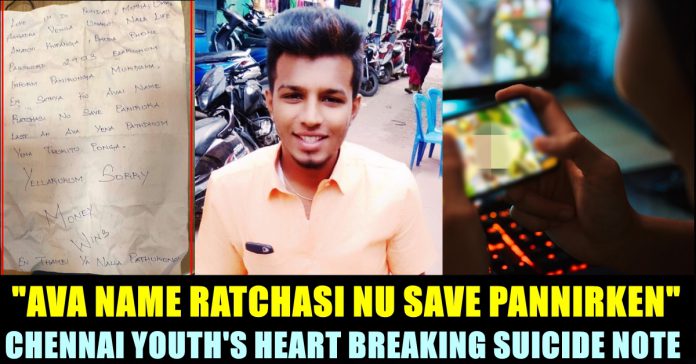 A student in chennai committed suicide after losing money in an online game named as “Casto Club”. Named as Nitish Kumar, the youth wrote a suicide note before killing himself to let his loved one know about the cause of his death. The 20 year old college student died in a tattoo studio in Aminjikarai according to reports.

The Youth who was living with his parents and a brother in TP Chathram, is a final year BCA student in a private college in Chennai. He worked as a part time employee in a tattoo studio in Chennai, according to police.

Nithish went to tattoo studio in the evening of Sunday after informing his parents that he has some work to do there. When he didn’t return, the parents called his mobile phone only to find that it was switched off. They sent their younger brother to check who found Nithish hanging from the ceiling in the studio. “He alerted the owner immediately” said Police officers to media.

Aminjikarai police who rushed to the spot retrieved the body and sent it ti Kilpauk Medical college for post mortem. The suicide note of Nithish said that he took this decision after losing all his savings in the casto app online game.

“I’m the only one who is responsible for this decision. I lost my hard earned savings in an online game named as “Casto Club”. I even took Rs.20,000 from the shop and lost it too. I got depressed and now decided to take this decision even though it is wrong. I don’t have any other choice. I’m so sorry Sekar anna for losing your money without your permission”. the letter of Nithish read.

Nithish asked apology to his parents and to his lover Sathya. He wished to become her husband in his next life. He who revealed his phone password, asked the one who reads the letter to inform about his death to everyone. He said that he saved his girl friend’s name as “Ratchasi” and requested to make her see him for one last time before performing the last rites. He who asked apology to everyone, asked his parents to take care of his younger brother.

Nithish Kumar’s father is running a grocery shop, said Police. In the casto Club app, one can trade money on certain colours and digits in the game and if the same colour and digits appear on screen, you can win upto nine times the money you traded. Each trading lasts about three minutes, first two and half minutes to choose the colour and the digit and the result will be displayed in the next 30 seconds. The money will be sent directly to the gamer’s bank account if he wins.

This news made the users of Internet to react in various ways. Many felt sad for the youngster whereas others expressed their disappointment over his ignorance.

Previous articleFan Compared Vanitha’s Expression With Vijay’s !! Check Her Reaction
Next article“Trisha Is Surviving Only Because Of Her Caste”- Meera Mithun !!

Kamal Haasan is an epitome of Tamil cinema who is now being recognised by many as a politician. His "Makkal Needhi Maiam" which is...

Actor Suriya, on Sunday, came up with a tweet informing his followers that he got infected with COVID 19 virus and is currently recovering....

Rajesh Kannan Singham who is working as a police constable in the station located in Ambalamula area next to Kudalur, got condemned by judge...