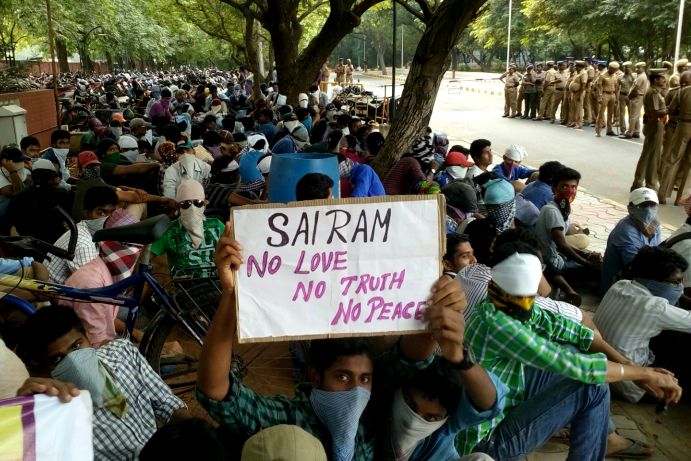 Striking is
a form of protesting against a management for its unacceptable actions or
demanding for the right justice of certain requirements. And when a college’s
students strike for a number of times for the same scandal, it only means that
the college has failed more than once in a particular issue.
Sai Ram
Engineering College, founded in 1995, has been famous for its placements, but
more so for its atrocity behaviour in ill-treating its students. There have
been a number of times the students have started a protest against the college,
which almost revolves around the same issue.
In 2006.. Protest for bad food.

This
happened when the college brought a rule that students should have their food
in college and not bring it from home. The students were paying around Rs.40 a
day and the food given was pathetic. They were not ready to have their lunches
and were standing outside the Canteen as a protest. People were standing
silently. It was just a boycott and not actually a strike.
The
management asked the students to go back to the classes but they refused. They
stood their ground and said no. And as a result, their parents were called for
a meeting. The students were beaten and their parents were abused in tamil.
They were made to accept that they started a strike and told them to follow the
rules that were laid to them.
In July 2010.. For arresting Balu.

It’s well
known that Balu, who is the head of goons working in the institute. The
students are mis-treated, abused and beaten inside a room. And all this for the
silliest of reasons like not shaving, wearing a black dress, talking to the
opposite gender and so on.
Balu, has
physically abused the guys, tortured them by beating with lathis, and the girls
by physically abusing them in front of the whole class. When the students
couldn’t tolerate this anymore, they went on a strike in front of the Tambaram
Railway station, shouting the slogan, ‘Arrest Balu immediately’.
One of the
students talking about the strike .
In September/October 2015.. Strike
against the rules of the college.

Students
started a strike in Anna University owing to all the atrocities of the college
in the name of rules. They weren’t allowed to wear certain dresses, talk to the
opposite gender even outside the campus, denied of going to drink water or go
to the restrooms during class hours, wearing black coloured dress, having an
account in any social media or bringing home food. They were fined heavily if
caught for doing any of these. Also, the supervisor Balu’s continuous physical
and verbal abuse was going beyond the limit.
The
students’ major demand was for the protection of the girls and dismissing Balu
from the organization. They even protested in front of the office of the
Commissioner of Police in Egmore. After which, Anna University initiated
a team to check on the college authorities.
Watch the
video of Alumnae confessions
In March 2016.. Seeking justice for
Abinath’s death.

After the
death of Abinath as he hanged himself due to the torture he underwent in the college,
around 60 students protested on road in T.Nagar asking for justice and the
necessary action to take place against the management. But they were beaten
badly by the police and were arrested.
This news
has created a rage in the media, however the college officials are trying to suppress
the matter. This had happened again due to the Campus supervisor Balu, the
moron who abuses the students.
All this
torture had led many students to end their life. By far, Sai Ram College has
been the highest suicide attempting college ever. The worst part would be, when you Google for the college and click the Wikipedia link, you’ll find this. I hope the college gets ashamed of it.
The students
have gone on strike against the same issue several times and the college
doesn’t seem to have taken any step. It’s high time that the authorities take
actions against Balu and dismiss him from the college.
We were able
to come up only with these strikes by the Sai Ram students. If any of present
or the passed out students know more information about the strikes against the
management, and the reason behind it, please feel free to mention in the
comments below.
Previous articleThe Reason Behind Virat Kohli & Anushka’s Breakup Exposed – 40 Crores
Next article10 Steps To Identify Fake Profiles On Facebook

Master movie of actor Vijay is currently under shooting progress and is expected to hit the screens on the April month. The film “Master”...

This Internet User Abused Oviyaa For No Reason !! Here’s How She Gave Him Back !!

Oviya, is an Indian model and film actress who has worked predominantly in the Tamil and Malayalam film industries. She made her breakthrough as...