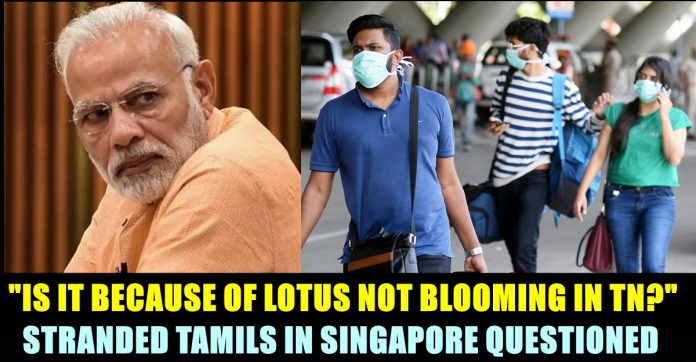 Tamilnadu people who got stuck in Singapore due to this COVID 19 lockdown, questioned the biased mindstate of central and state government. Many including pregnant ladies and elder people are struggling for food and shelter with not being able to attend the funerals of their closed ones in Tamilnadu. Some people are staying here with expired visas, says a letter which got surfaced in Internet on behalf of the people who are awaiting for a rescue flight in Singapore.

The ministry of external affairs not arranging even one flight to bring back tamils stranded in Singapore under phase 2 of Vande Bharat mission. An earlier flight meant for them was also cancelled citing operational reasons. People who are clueless questioned the strange activities of Chief minister Edappadi Pazhaniswamy and central government.

Through the letter, people who got stuck in Singapore asked whether Central government is avenging Tamil people as they are not getting votes for their party members in Tamilnadu. They also asked whether Singapore government’s good care for the Tamils made Indian government to feel lethargic about their own people. They also expressed their disappointment over media channels which are keeping mum about this issue.

On May 23, Tamilnadu government requested Central government not to resume flight services in Tamilnadu till 31 of May. The centre accepted the request immediately which made the people who stuck in Singapore to ask why Centre accepted it so quickly as they will stay unresponded to most of the requests of the Tamil speaking state. “It makes us to think that both the governments are approaching this issue with an animosity” read the letter.

“If our visa gets expired in Singapore, we will be reprimanded with a fine amount between 4000 singapore dollars and 6000 singapore dollars, 6 months of Jail sentence, 3 floggings. Considering the time period, we have to face all the three punishments or any one of them. Now, most of our visa got expired already” the letter read. “If we get punished, it will be a shame to central and state government that cannot be cured forever.” the letter added.

“The importance that is given to North Indians is not being provided to Tamils. Are we not Indians ??” people who are in Singapore asked. “We also request central government to realize that tamilnadu is a state in India.” said the letter which asked them to help people who are struggling there with expired visas.

Woman Complained About A Lady Selling Fish In Train By Posting Her Picture !! Got Thrashed !!

India’s rail network is one of the largest and busiest in the world, and Indian Railways is the world's eighth-largest employer on earth, with...