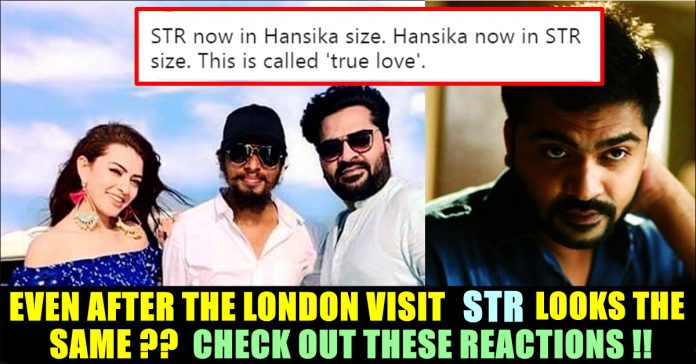 STR Still Looks The Same Even After The London Visit ?? Check These Reactions !!

Silambarasan aka Simbu aka STR is all set to be seen opposite ex Hansika Motwani as an extended cameo role in her 50th film, Maha. The estranged couple, who was in head over heels in love with each other and parted ways after a short relationship. There were reports that the couple was set to tie the knot but that did not witness broad daylight. Now, Hansika and Simbu are reuniting on the big screen after a few years. 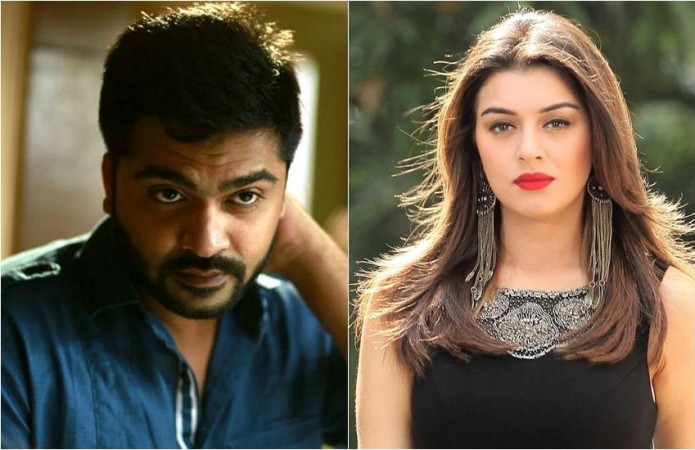 According to an earlier interview, director UR Jameel said that it was Hansika who had suggested Simbu’s name for the extended cameo. She even got in touch with Simbu and got him on board by convincing him. However on seeing the viral picture in which Simbu and Hansika is seen posing for a picture standing on a ship, few social media users trolled Simbu for not reducing his weight. STR reportedly went to London a couple of months back to work on his fitness and to shed weight for his role in Venkat Prabhu’s political drama, Maanaadu, produced by Suresh Kamatchi.

Simbu came back to Chennai for his brother Kuralarasan’s marriage. On seeing STR’s marriage photos, fans of him got excited and shared it in their respective timelines believing that the actor had reduced his weight. JUST IN : Finally STR Getting Married ?? Here’s What The Actor Has To Say !!

After Maha’s shooting spot picture released, many fans started trolling the actor for being in the same way as he was in the past.

Simbu and Hansika from the sets of debutant U. R. Jameel directorial #Mahaa, the 50th movie of the actress.

Simbu will be playing an extended cameo in the movie.

Is weight loss done by @ihansika or STR?🙄

Still he looks fat 😂 😂 … What about the weight loss program …

Maha also stars Srikanth, Thambi Ramaiah, Karunakaran, Nasser, Jayaprakash and Chaya Singh in supporting roles. The film, which is produced by Mathi Azhagan, has music scored by Ghibran. Manadu will be Venkat Prabhu’s 9th directorial venture. The title look poster of the film was released on July 10, 2018, amidst high expectations.

Previous articleFake News About Sanath Jayasuriya’s Death Surfaced !! Ashwin’s Tweet Made People Angry !!
Next articleBIGG BOSS Julie Posted After A Long Time !! Got Trolled By Her Own Followers !!

Tired Of Getting Fake News In Whatsapp ?? Here’s The Perfect Solution From The Whatsapp Itself !!

WhatsApp has launched its next weapon in the fight against misinformation on its platform in India: a tip line to which you can send...