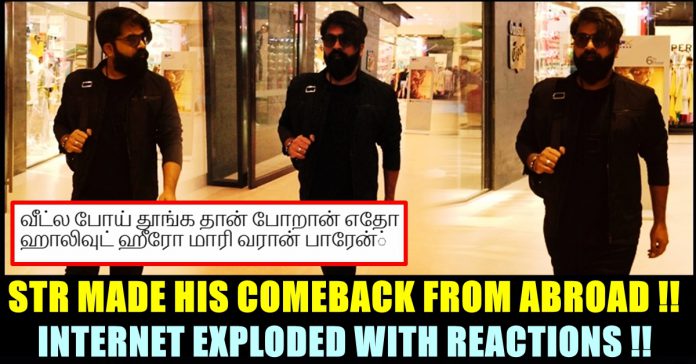 Simbu who was in Bangkok for all these days has made his come back to Chennai and the picture are getting circulated in Internet like a wildfire. Simbu aka STR aka Silambarasan who is known for films like Manmadhan, Vallavan, Vinnai Thaandi Varuvaya enjoys a huge fan base for his films. Arguably he is also one of the most controversial celebrity of Kollywood industry.

Check out his recent pictures that are going viral here :

The actor who seems to be in a shopping mall donned himself in complete black including his ornaments. The long beard and new hairstyle made him look so cool and his fans are expecting him announce something regarding his future projects very soon.

The actor who was last seen in “Vantha Raajava Thaan Varuven” by Sundar C as protagonist, has attended shoot of the 50th movie of Hansika, his former girlfriend. There were shooting spot pictures of Simbu with gautham Karthik were also released which is a movie produced by Gnanavel Raja. It was said to be a remake of Kannada remake “Mufti”. However, that project didn’t elevate to next level as well.

Days after the news of Maanadu’s drop announced, Simbu announced through his manager that he is going to make his own movie “Maghamaanadu” under his banner. After that the actor went “Thailand” according to the report of Indiaglitz. Now these pictures made his fans extremely happy. However, few fans trolled him for not completing a single project since VRV. Check out some of their reactions here :

Omg 😍😍😍 he is so damn cute nd handsome breath taking pic of my #STR wat a man 😘😘 our #strreturns pic.twitter.com/fVthoRKybE

He is one swagger 💥👌👌👌 #STRReturns

And the man is back! #STRReturns!! Now, waiting to see what he's going to announce!! #Simbu #Silambarasan #STR @hariharannaidu pic.twitter.com/zNaCFLWiUi

What do you think on this new changeover of Simbu ?? Comment your views !!

Previous articleCSK Trolled This Top Player For Posting Video Without Shirt !! Check Out His Reply !!
Next articleJUST IN : Kavin Bailed Out His Mother ?? SHOCKING REPORT !!

Kollywood actor Vignesh who is known for acting in films such as "Kizhakku Seemayile", " Kannethirey Thondrinaal", met press reporters and said that he...

CHENNAI : Video Of Woman & Bus Conductor Fighting With Each Other Caused Ruckus !!

A video that shows a woman and a bus conductor attacking each other physically is going viral in social media platforms. The incident took...