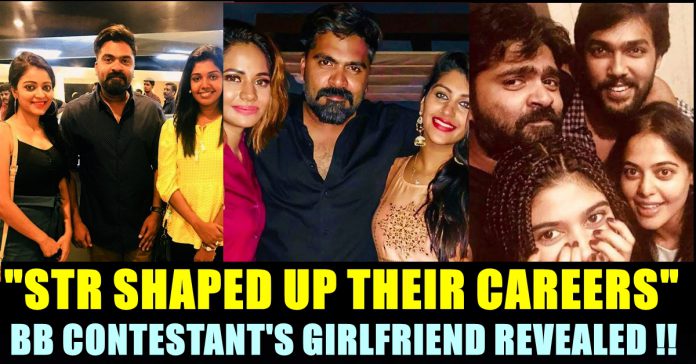 Bigg Boss Tamil completed its three successful seasons and all of them were hosted by Ulaganayagan Kamal Haasan. Reports suggests that he is going to host the next season as well. The first season of Bigg Boss was won by Aarav who acted as protagonist in a film titled as “Market Raja”. The film is expected to be released very soon. The second season of the show was won by Riythvika and she is busy promoting her upcoming movie “Irandam Ulaga Porin Kadaisi Gundu”.

The third season of the show was won by Mugen Rao, singer and model based on Malaysia. Having acted in many music videos, Mugen Rao is alos expected to be very busy in Tamil film industry. Apart from them, Bigg Boss contestants such as Raiza Wilson, Mahat Raghavendra, Harish Kalyan, Yashika Anand, Aishwarya Dutta, Oviya are busy in their respective projects.

Now to our surprise, Sanam Shetty, girl friend of Tharshan has revealed an unknown fact about the personality who helped the contestants in shaping their career in film industry. Simbu aka Silambarasan aka STR is the one who is constantly stretching his supportive hand to the Bigg Boss contestants throughout all the seasons, according to the recent Instagram post of Sanam Shetty.

The post which has Sanam Shetty along with Silambarasan in his new get up, contains a caption about STR. About helping the Bigg Boss contestants, Sanam Shetty says “He has gone out of his way to guide bigboss contestants throughout all the seasons to help shape their career. STR – U r the realest person iv had the pleasure to meet….Pure GOLD💝 Welcome back!”. She also thanked STR for gifting HERO book and said that he liked it.

Im a fan of many actors but im the truest fan of one man – STR 🤗💝 I may have known him for just a little while but that is enough to say that iv never met anyone with a more loving and giving heart than him. Truly an evolved soul far beyond our normal understanding but treats everyone as his equal with the same respect and love! His motivation especially to @tharshan_shant and me is unbelivable🙏 We both love u Simbu🤗❤ @iam_str Btw Tharshan loved ur gift – HERO book. He has gone out of his way to guide bigboss contestants throughout all the seasons to help shape their career. STR – U r the realest person iv had the pleasure to meet….Pure GOLD💝 Welcome back!🤗 @iam_str @strofficial__ @str.offcl @str.offcial #blackngold #strfans #silambarasan #tharshanarmy #bigboss3tamil

Simbu who is a dear friend of Sandy, Mahat and Harish Kalyan, never missed to welcome them after their Bigg Boss stint, videos of which were went viral in social media platforms. The actor who came back from abroad lately, has announced that he is going to make a film titled as “Magha Maanadu” with a budget of 125 crores under his own banner.