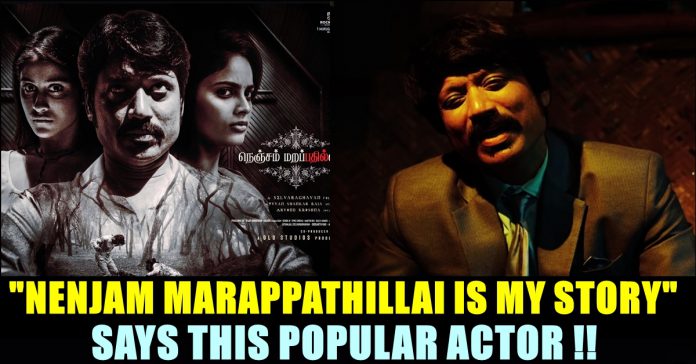 The most awaited “Nenjam Marappathillai” of directed by Selvaraghavan got released in theatres after nearly five long years since its production. After so many struggles, the makers have managed to get theatrical release for the film. As soon as the film got released on theatres in the theatres of Tamil nadu, it started receiving positive response from the public. Now, through an interaction with a private youtube channel, most prolific dance master Kalyan who is known for choreographing Vijay, Ajith, Vikram, Suriya has revealed that the story of “Nenjam Marappathillai” was initially pitched by himself to director Selvaraghavan.

Issue Between Radiance Media and Escape Artists is Sorted , just got cleared by the court THX A LOT TO ALL THE FANS WHO HAVE BEEN PRAYING AND WAITING FOR THIS RELEASE #NenjamMarapathillai NAMMA PADAM UNMAYAVE RELEASE AHUDHUNGA 😍🙏@selvaraghavan @thisisysr @Madan2791 @Arvindkrsna

The film features S.J Suryah, Regina Cassandra, Nanditha Swetha in the lead roles. After getting completed in the year 2016, due to various consecutive issues, the film managed to reach the audience only on 5th March of 2021. The film which is based on a woman taking revenge on her lustful employer, garnering positive receptions from the viewers who watched it.

Now, Dance Master Kalyan who rose to fame among public audience through judging contestants in “Jodi Number One” dance reality show, in the most recent interaction with Galatta youtube channel, has revealed that the story of “Nenjam Marappathillai” was pitched by him.

“Nenjam Marappathillai is a special film for me as I was working with Selvaraghavan since “Kaadhal Kondein”. The choreographies in the films of Selvaraghavan will be different as we all know. His songs will be an extension of a scene.” Kalyaan said while talking about his relationship with the seasoned filmmaker.

“The story of “Nenjam Marappathillai” is mine. I am being a part of a film in this way for the first time. I am looking forward to see how people are going to receive the film, that too in the screenplay of Selvaraghavan. I am sure it is going to be phenomenal. I have been trying to direct a film for a long time” Kalyaan said in the interaction.

“This is my first story. While I was discussing with Selvaraghavan about directing a film, Selvaraghavan liked this story a lot. While we were planning on the making and release of this film, Selva said that he would direct the film. I immediately accepted and became very happy. It is a proud moment for me. A director like Selvaraghavan accepting to direct my story is a huge recognition for me. I am blessed and happy” said Kalyaan.

Further Kalyaan said that he planning to direct a film since very long time and hoped for it to happen soon. In the interaction, Kalyaan also shared about his experience of working with top tier actors such as Vijay and Suriya. The choreographer said that both of them are down to earth and naturally humble.

Previous articleArya & His New Best Friend “Teddy” Goes On For A Thrilling Adventure !! “Nanbiye” Video Song Out
Next articleVimal Warned Miscreants Who Defamed Him !!