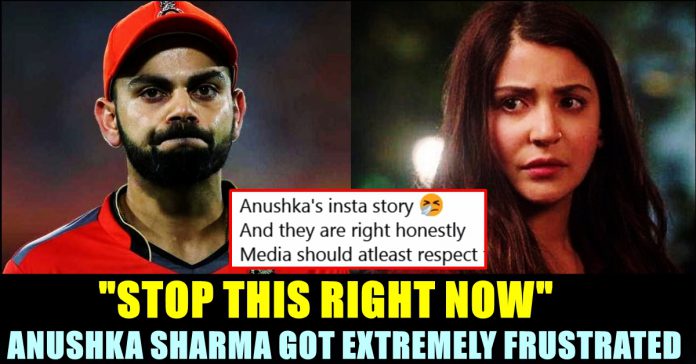 Bollywood actress Anushka Sharma who is expecting her first baby, expressed her frustration over a photographer who breached her privacy. Virat Kohli, her husband took paternity leave and left the Indian team after finished playing the first test match for India to accompany his wife during this important moment of their life. Now, realizing that paparazzi are breaching their privacy, the actress vented out her emotions through her Instagram story.

In the picture, we could see Anushka Sharma sitting with her husband in their balcony. “Exclusive! ETimes got their hands on Mommy-to-be @anushkasharma and @virat.kohli twinning in white as they have breakfast in their balcony Photo by Raju Shelar” read the caption of the post shared by Anushka Sharma.

Videos of public and media following the couple with their vehicle and photographing them by standing in front of their house are also being circulated in social media platforms.

Many People and Media following Virat and anushka on Bikes pic.twitter.com/w1T9E5NwLv

“Despite requesting the said photographer and the publication, they still continue to invade our privacy. Guys Stop this right now” Anushka wrote in her Instagram story by adding the picture.

Anushka gained full support from the social media platforms for her post as people wanted the media publications to leave the couple alone. “Media should atleast respect their time at home” wrote a twitter user on seeing her story whereas another one said “Anushka Sharma and Virat Kohli suing all these irresponsible media houses is all I want to see right now”

Anushka's insta story 🤧
And they are right honestly
Media should atleast respect their time at home🤦 pic.twitter.com/2HbphQnutG

Manifesting that they sue these media houses who still haven't taken down the posts even after Anushka's posted a story.

why does anushka sharma has to fight media and paparazzis over and over again? this was at their home wasn’t it? public place is one thing but y’all can’t even let them live in peace at their home? fuck you

Since her pregnancy, Anushka Sharma is pretty much active in social media platforms, sharing the pictures and videos of herself, inspiring the soon-to-be mothers. Check out some of her recent posts below :

Actress Anushka Sharma came up with a story in her official Instagram handle, requesting fans, public and media not to reveal the picture of...