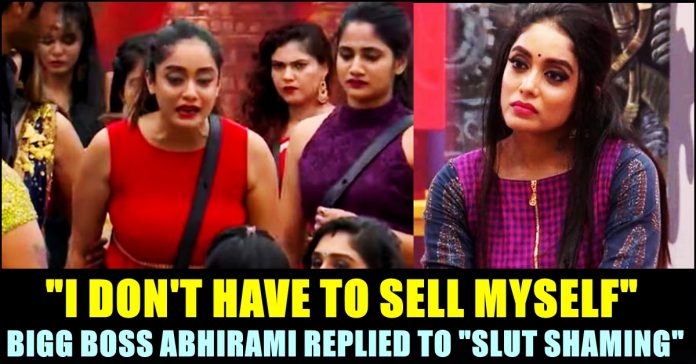 Abhirami Venkatachalam, former Bigg Boss contestant and model came up with a couple of Instagram stories lashing out at people who “slut shamed” her by writing inappropriate articles about one of her old photos. The “Nerkonda Parvai” actress vented out her emotions by saying that the people who encourage such write ups are the reason for the suicides of celebrities. “Stop Slut Shaming”, “I will stand for me”, “Even if no one does” read the hashtags of Abhirami Venkatachalam.

Abhirami Venkatachalam is one of the many Bigg Boss contestants who is pretty much active in the social media platforms. The model got debuted in Tamil film industry through Ajith Kumar’s court room drama “Nerkonda Parvai” which is a remake of Bollywood blockbuster “Pink”. In the film, she played the role of one of the friends of Shraddha Srinath. Having nearly 9 lakh followers in Instagram, Abhirami had uploaded 856 posts in the photo posting social media site.

Now, an inappropriate article which was written about one of her old posts, seems to have left the actress in a dejected state. Abhirami who wanted to address the mental trauma she is going through, wrote a post in her Instagram account saying that the state Tamil nadu which is welcoming other state people and letting them lead a successful life, is a grave yard to the people who belongs to it and making them cry. “Vandaarai Vazhavaikum TN Ingu ullorai azhavaikum sudukaadu” Abhirami’s post read.

Sharing an old post of herself, Abhirami said that she won’t share the particular article which slut shamed her as it would make those people who wrote it famous. She further asked them to mind their business and added her modelling job is much more dignified than the job they are doing. “even if I don’t even work or earn I have a mother and brother to take care of me. I don’t have to sell myself ps- not offending anyone” Abhirami wrote in her post.

“The picture that I took in 2016 is getting famous now, wow social media fools have no other job .. won’t share the article cos dont wanna make you
ba*tards famous. but you know what this out fit looks nice on me imagine yourself your own mom will hang herself.. vera edavdu vela irunda poi
parunga .. even if I don’t even work or earn I have a mother and
brother to take care of me. I don’t have to sell myself ps- not offending anyone A.. so chill, and by the way ungalamadri aduthavangala manabangapaduthra pozhapavida my Modeling job is more dignified..” entire post of the actress read.

“People who keep quite by seeing all this And ppl who encourage all this are the prime reasons for the celebs to take their life off. bravo Aprom avanga savulayum videos write ups potu sambadikardu.. Inda pozhapukku nengellam ** Now don’t tell don’t react, “unaku nadanda theriyum “is my reply” her next story read.

Previous articleWarner’s Heartfelt Message To Natarajan After India’s Win !!
Next articleRohit Exposed The Truth About His Friend Hemnath !! WATCH