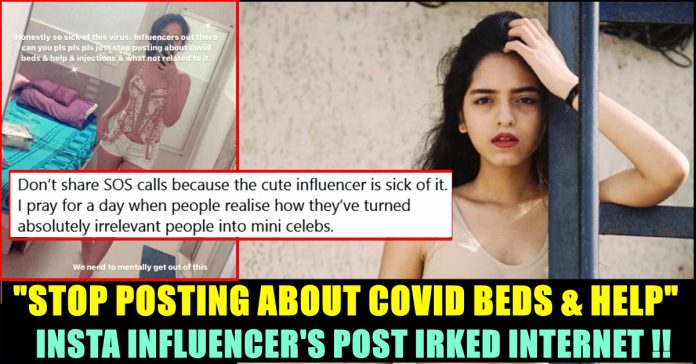 An Instagram influencer named Priyam Joshi who enjoys 30 k plus followers in the photo/video posting social media platform, recently uploaded a post in her timeline asking people to spread positivity amidst this COVID 19 situation. She wanted her fellow influencers to stop posting about COVID 19 beds, help, injections and anything related to it. Her post didn’t go well among the other users of social media as a result of which she came up with a clarification video seeking an apology.

“Honestly so sick of this virus. Influencers out there can you pls pls pls just stop posting about covid beds & help & injections & What not related to it. We collectively need a break from this. Let’s talk about the other good & lively stuff going around in the world . Not of dying people. We need to mentally get out of this” she wrote in her post by adding a mirror selfie of herself.

Many users of social media platforms including her followers who happened to witness this post of Priyam Joshi, slammed her saying that she shouldn’t be influencing her followers this way. “Absolute opposite of the influencing anyone should be doing right now.” said a Vishal menon whereas another one said “Dear lord your PRIVILEGE is showing!! This is an ig “influencer” with 30k followers!? What is wrong with people?????”

Dear lord your PRIVILEGE is showing!!
This is an ig "influencer" with 30k followers!? What is wrong with people????? pic.twitter.com/Xx5Z0DGRnt

Don’t share SOS calls because the cute influencer is sick of it. I pray for a day when people realise how they’ve turned absolutely irrelevant people into mini celebs. pic.twitter.com/rsucr1ZMuV

Absolute opposite of the influencing anyone should be doing right now. pic.twitter.com/8Z3khFCdtR

while everyone is rubbing their asses to help complete strangers get out of crisis….
.
.
miss priyam joshi pic.twitter.com/tA4Pw92NIf

This girl ( insta @/priyamjoshi ) is the real side of wokeism and leftism.
Can we ever fight with this virus ? pic.twitter.com/ifiNGaUuXI

are u fucking stupid? is there ANYTHING UP THERE?? pic.twitter.com/ATsVMmJGIG

Reacting to these comments in social media, Priyam Joshi released a clarification video seeking an apology. “I would like to start this with an apology to whoever it may offended because that wasn’t really my intention. I just wanted to spread some positive vibes among this major pandemic.” she said and went to describe how she feels about the demise of her grandmother who died two weeks ago.

“My own grand mother died two weeks ago and it was really really tragic. I was devastated because I was really close to her. But rather than psyching in sadness, I am trying to accept the reality as it is. I am trying to maintain as much as stability and positivity I can. It’s like I am being blamed for the extension of humanity. You need to understand that death is inevitable. It comes no matter what.” She said.

Watch the video clarification she released below :

Here’s the picture she shared in her story :