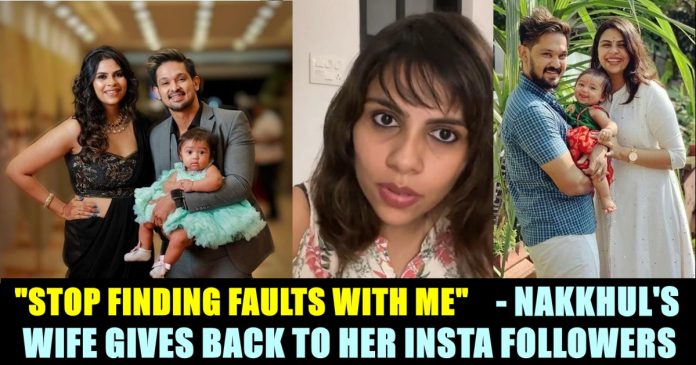 Shruthi Nakkhul replied to her Instagram followers who advised her on how to take care of her baby after sharing a picture of herself with her baby on her Instagram page. Both Nakul and his wife Shruthi are very much active in social media platforms and has been sharing the photos and videos of themselves on Instagram.

It seems many people have advised Shruthi on how to take care of her toddler after seeing her story. Frustrated with this, Shruthi posted a story again stating that there is a way to communicate and tell things nicely. She also said people can’t send rude messages to a profile just because it is a public one.

Shruthi is the wife of Mumbai born Tamil actor Nakkhul. Nakkhul debuted as one of the lead actors in the movie Boys (2003) directed by Shankar, in which he also sang his first song. He later made a breakthrough portraying a psychotic lover in Kadhalil Vizhunthen (2008), before winning acclaim for his performances in Maasilamani (2009), Naan Rajavaga Pogiren (2013), Vallinam (2014), and Tamilzhuku En Ondrai Azhuthavum (2015) which was the biggest blockbuster hit in his career.

Nakkhul married his long-time girlfriend Shruthi Bhaskar on the 28th of February 2016. Earlier Shruthi had worked in the marketing arm of Chennai based SPI Cinemas. Now she turned to be a baking chef and started an Online Baking Venture named Sweettooth Fairy.

Shruthi and Nakkhul are known for singing together and making videos for their Instagram followers which receive huge responses among their fans. They are also known for being huge animal lovers and own many cats and dogs. They have been huge advocates for Indie dogs and post many cute pictures and videos especially with their pet dog Oola. The duo gave birth to a child last year and named her as “Akira”.

Being an active user on social media, Shruthi posted a picture of her family on her Instagram story, tagging her husband Nakkhul by mentioning ‘Monday Vibes’.

Today (31-08-2021) being a Tuesday, her Insta followers had spotted her mistake of mentioning ‘Monday vibes’ on ‘Tuesday.’

On this note, Shruthi shared a picture with her baby mention, “Okay. Just realised it’s Tuesday. Sleep-deprived mommy here dealing with a sleep regression phase of an extremely active toddler. Every day seems like a Monday. Thankskbye.”

One and half an hour later, Shruthi posted the same picture with her baby saying, “I know her nails have grown and I lost her nail clippers and literally going out to bye one. AND can also only cut it when she’s sleeping which is NOT! And when she is, I’m also sleeping. So stop trying to advise and finding faults with not just me but any new mom. There is a way to communicate and tell things nicely. If someone has a public profile, it does not give anyone the right to be rude to them. Fin.”

It is very much evident that Shruti got frustrated over the messages she received for uploading a picture with her daughter in her own space. It is high time for people to mind their own business and shoot their advises to others only when its due. Comment your views on this reply provided by Shruti to her followers !!

When Apple released the iPhone X last year, it was widely considered to be the best smartphone the company had ever made, marking a...

Video Of Virat Kohli Accepting It As A “Revenge” Goes Viral !! WATCH !!

Virat Kohli led from the front and scored 94 not out to help India beat the West Indies by six wickets in the first...

“We Knew Kamal Haasan Before Knowing About Modi & Amit Shah” – Replied Fans To This Controversial Personality !!