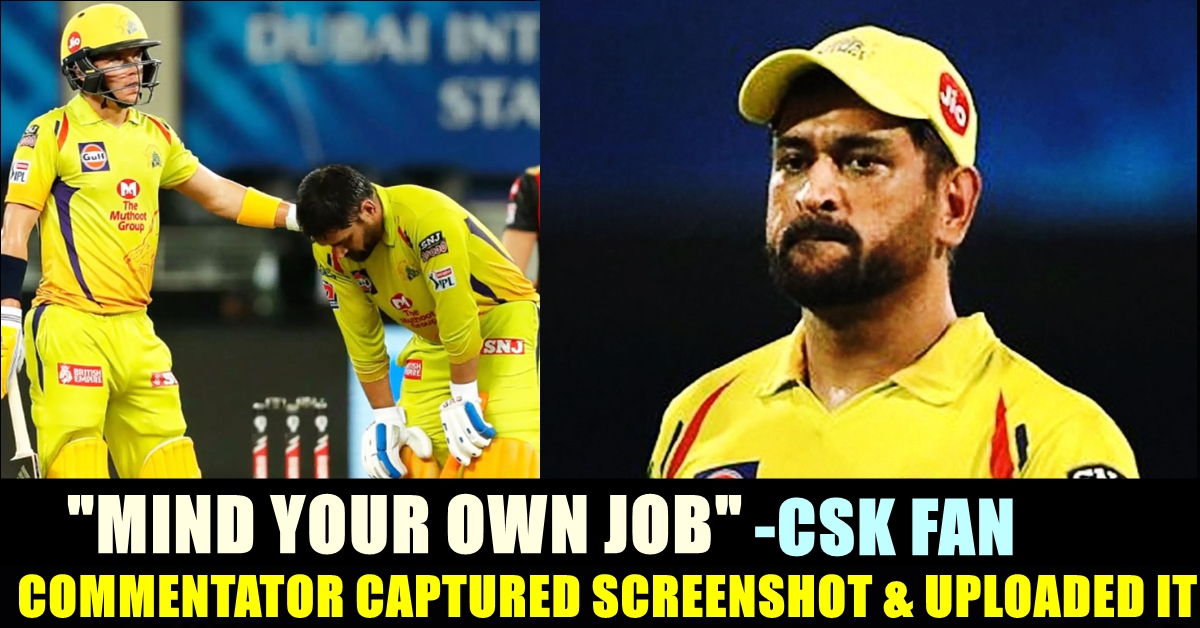 For doing his job, a fan of former Indian captain Dhoni confronted Simoun Doul, a cricketer turned commentator who is currently involved in commentating the ongoing matches of the IPL tournament. For criticizing Dhoni’s poor batting form in the tournament which acted as one of a factor for the team’s setback, a fan sent a message to Simon asking him to “mind” his job. The former New zealand cricketer captured the screenshot and posted it in his official twitter account to teach him a lesson on “Job of a commentator”.

Unlike the past 13 years, team CSK couldn’t find a place in the play offs due to its poor performance. The team managed to get only 4 wins in the 12 matches it played so far. After winning the match against RCB on Sunday, a thin chance was visible for the playoffs but it faded away after Rajasthan Royals thrashed Mumbai Indians by chasing 195 runs on the same day.

CSK is a team that won titles two times back to back in the years 2010 and 2011. The team which came back in the year 2018, clinched the title one more time but failed to do it in the next year. Chennai Super Kings lost the final of 2019 by just one run to Mumbai Indians. Now, when the team was expected to give a massive come back, it ended it journey halfway due to the poor performance in all the departments such as batting, bowling and fielding.

Captain MS Dhoni’s batting form also acted as a big worry for the team. He who is known for finishing games in the modern-era of cricket game, scored only 199 runs with an average of 28.42. The former Indian captain’s strike rate is just 118.45 and the highest score he managed to get is 45 not out.

For criticizing the cricketer’s bad form during his commentary, Simon Doull who belongs to the star studded commentary box, got criticized by an ardent Dhoni fan. “Dear Simon, Please stop commenting on MS Dhoni! Hope you mind your own job. You have not done anything extraordinary to criticize the great man! With all due to respect please abstain from such habits! – CSK well wisher.” the fan wrote in his message.

Doull who captured the screenshot of the message, decided to give a piece of his mind to the online user. Simon said that making comments on the game of cricket and on people who are playing it is a commentator’s job. “Really sorry Pratik but in case you don’t understand the job of a commentator, it is to comment on the game and people playing it. Have a great day mate.” Simon’s reply to the online user read.

Really sorry Pratik but in case you don’t understand the job of a commentator, it is to comment on the game and people playing it. Have a great day mate. #bizzare pic.twitter.com/j7S8wCw6sv

The former cricketer also replied to a comment which said that there are very few number of people exist in the world who can comment on Dhoni’s performance. Referring to his cricket stats, Simon said that he could only talk about few members with his achievements in cricket.

And a short list of people I am allowed to talk about..😂😂