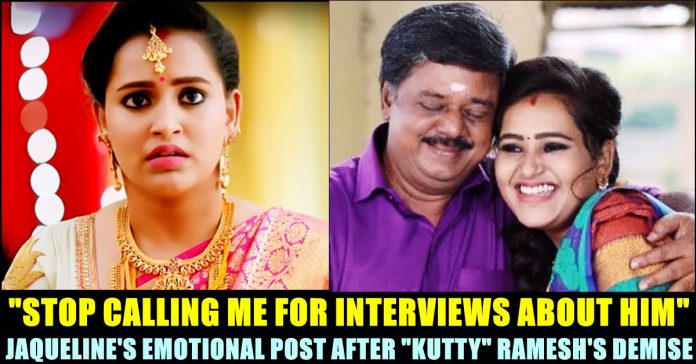 On the wee hours of 14th May, actor Ramesh who is popularly known as “Kutty Ramesh” passed away at a private hospital in Chennai. He who was acting in Television programs since past several years, was actively participating in the shooting of “Thenmozhi BA” which is being telecasted in Vijay Television. It is reported that Kutty Ramesh suffered a cardiac arrest and other COVID 19 complications. He was playing the role of “Subbiah” in the Vijay TV serial, lead role of which was essayed by Jacqueline.

Demise of the actor came in as a shock to the actors of Vijay Television. Jacqueline who played one of his daughters in the “Thenmozhi” serial, came up with a story in her Instagram , saying that she is so shocked to realize that Kutty Ramesh is no more. “You have been the best person and sweet dad. Will miss you so much and I am not lucky with dads” she said in her story.

Further, Jacqueline asked media portals to stop calling her to give interviews about him. “Kutty Ramesh Appa. I am so shocked that you are no more. You have been the best person and sweet dad. Will miss you so much. I am not lucky with dads. RIP. Stop calling for interviews about him” the serial actress’s story read.

Actress Asritha Sreedas who played the role of Kutty Ramesh’s younger daughter in the serial, uploaded a story writing “Will always be missing you Appa”

Actress “Kumbam” Meena, another actress of the serial, uploaded a post in her story expressing her grief over the demise of Ramesh. “We were believing that you will come back stronger. You have been inviting me to do Tik Tok and would ask me to upload the videos in Facebook. You also asked me how many likes and what kind of comments I have received. I pray to God for your soul to rest in peace”

Kutty Ramesh has also worked as co-director for a number of Television shows. He is also known for his roles in silver screen with actors Ramki and Mohan. Let us pray for the soul of Kutty Ramesh to rest in peace.

The number of projects which were supposed to be done by actor Vijay are plenty. Right from "Unnai Ninaithu" to "Singam", many projects were...

"Aranthangi" Nisha of Vijay TV fame responded to a report that said she bought a bungalow in Chennai city. The aspiring comedy actress said...

Abhirami Got Upset & Forgot Mugen After Seeing This Statement From Mugen’s Girlfriend ?? SHOCKING !!

Since getting evicted from Bigg Boss house, Abhirami Venkatachalam is very much active on social media platforms, especially on Instagram. She keeps meeting her...