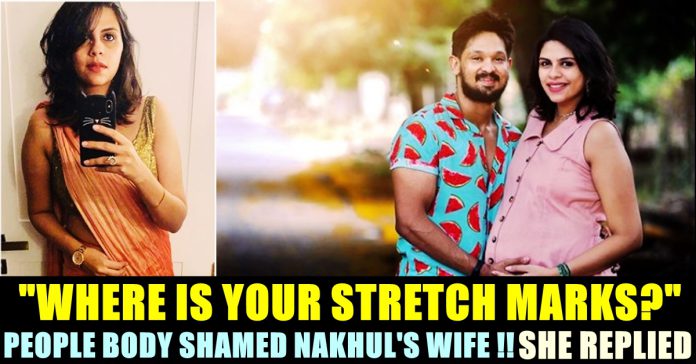 Actor Nakkhul’s wife Sruthi who is also a television host by profession, replied to the inappropriate comments she received for one of her recent posts in which she posed wearing a beautiful saree. Actor Nakkhul and his wife Sruti blessed with a baby girl on 2nd of August and the couple shared about it happily in his social media handle. Now, for posting a picture in her Instagram handle, many people started questioning Shruti how she became thin and made the stretch marks disappear in just three months. Shattered by such comments, Sruthi came up with a post schooling them to stop body shaming.

While uploading the picture of herself in Saree, Sruthi said that she thought people would love her saree and would love to buy the material as she draped it well. On seeing the comments questioning about the size of her body, she became extremely upset which is evident through her post.

“When I posted this photo of me in this saree , honestly the only thing I thought was wow , I draped this saree well and people would also love this material and would love to buy it. But I was so shattered when many of them messaged me asking how come I’m thin and don’t have stretch marks because it’s just been 3 months since I gave birth.” Shruti wrote in her post.

“I’m that and also this. I still carry some of my pregnancy weight. I still have that pregnancy belly and extra love handles. I still carry those stretch marks. I still struggle sometimes when I wear my old clothes and they don’t fit like they used to. I do sometimes feel bad when I have to buy a size bigger. I do have dark underarms and don’t give a damn and wear sleeveless.” she added.

Further, she said that took years for her to accept herself. I used to hunch and walk because people used to make fun of my height. I used to roll my shoulders down because I was constantly conscious about the size of my breasts.” her post read. Sruthi said that these kind of things gave her constant back pain and leg pain.

“Don’t be so hard on yourself women. You just went through SO much mentally and physically during pregnancy and post that ! Losing weight
immediately or trying to get rid of the scars should be the last thing you need to worry about. It’s not easy being a mother. And why do you need to even get rid of the scars ? People celebrate scars which you get out of
war. Why not not out of pregnancy? Why not carry the stretch marks you have after you’ve lost weight ? It reminds you of what you are and what you’re capable of.” she motivated other women.

She asked women not to let even their husbands to shame them. “I read so many posts on Swati’s page about how husbands and in-laws were shaming women for not losing weight or for not gaining weight, the size of their
breasts or dark genital/ thighs / neck / arms. Shame on you guys! If you’re a husband/ mother / sister / wife a friend to a new mom or to anyone who’s struggling with bodily issues and you’re reading this ? I sincerely hope that you consciously stop passing such insensitive and hurtful comments.” she said through her post.

She further said that having a good partner resolves half of these problems and asked women to get married when they feel like it. “This again brings me back to the topic of marrying / being with the right person. Most of them are pushed LITERALLY to get married or have children because they’re “old” or in the “marriageable” age. All those things need to happen only if you’re ready mentally. If you’re with the right person , he or she will support you and stand by you. Half the problem would not be there if you’re married to the right person. DONOT ignore the red flags. Trust your instincts. Would you rather be married because of pressure and age to the wrong person and suffer for the rest of your life or go through a divorce ???? Or even if it’s a little late, find the right one and live happily for the rest of your life ? Ponder.”

Nakkhul married to his long time girlfriend Sruthi Baskar on 28th February of 2016. The adorable couple has been sharing the cutest moments of them together in their respective social media accounts. They named their child as “Akira” and celebrating her birth. Comment your views on this post Sruthi Nakkhul !!

Previous articleMukesh Ambani Shared About His Father’s Legacy To Mark Zuckerberg !!
Next articleFans Trolled Sakshi For Talking About Finals !! Check Her Replies

BLUE SATTAI Maaran Reacts To The Criticisms He Faced For Trolling Ajith!!

Movie reviewer "Blue Satta" Maaran came up with the lyrics of a song from actor Ajith's movie to defend himself from the criticisms he...

Television celebrity Bhavana Balakrishnan who currently presenting the cricket matches of India for private channel, reacted to the toxic followers of her Instagram handle...