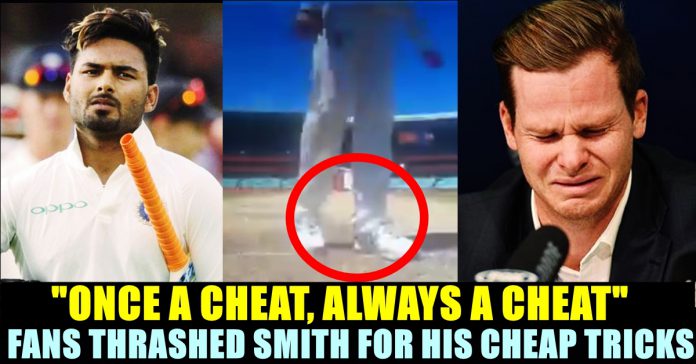 While everyone wanted team India to play for a draw, Pant’s terrific innings of 98 runs from 113 balls gave the side to have a hope for the win. His successful partnership with Pujara could have made team Australia to think of many could have and would haves. They declared their innings at 312 and demanded Team India to 407 runs to win the test match in 138 overs. As of now, with the help of the above mentioned duo, India need 127 runs to win with 30 plus overs to go in the final day of the test.

Meanwhile, Steve Smith, former Australian captain, caught in controversy for his unsportsmanlike behaviour on Day 5. He was caught on the stump camera scuffing up the batsman’s guard on purpose during the drinks break in the first session. 23 year old Rishab Pant who came in to bat again, had to mark his guard all over again.

This gesture of the cricketer irked the fans of Team India and even fans of Australia are slamming him for his negative tactics. Though the face of the top order Australian cricketer is not visible in the video, fans confirmed it as Smith after seeing his jersey number 49.

After drinks break Aussie comes to shadow bat and scuffs out the batsmen’s guard marks.

“Once a cheat always a cheat” wrote a fan to vent out his emotion against Smith whereas another one said “Shame On You @stevesmith49 I feel guilty For Supporting you on your bad time.. You will Always remain a cheater.. Moreover your hole #Australia Team is Cheater and abusers”

Former Indian cricketer Aakash Chopra came up with tweet writing “Shoes can be used for many things. Removing an opponent’s batting guard mark too…. Not for taking sharp catches though….”

Shoes can be used for many things. Removing an opponent’s batting guard mark too….
Not for taking sharp catches though…. #Smith #Pant #AusvInd

Shame On You @stevesmith49
I feel guilty For Supporting you on your bad time.. You will Always remain a cheater..
Moreover your hole #Australia Team is Cheater and abusers😡#AUSvIND #SteveSmith #pant

Once a cheater…Always a cheater..!!

This is Steve Smith @stevesmith49 Scruffing out Pant’s gaurd So that he will have to take it again….in between an over…He’s an passionate cheater..!! You deserved those harrasments. #AUSvIND #TeamIndia @ItsGauravAyaan @Ashwinm03767120 pic.twitter.com/yoNC8vPCLE

Kohli made a mistake by telling the crowd to stop booing Smith. He deserves every bit of it. Erasing Rishabh Pant’s guard is yet another testament of his character. Disgrace to the game of cricket. #SteveSmith

So apparently Steve Smith (Jersey No. 49) did dirty trick again, not with sand paper though it include some rubbing, removing pant guard, trying to unsettle batsman.
You can be a great batsman, but very low as player. #ShameOnSmith https://t.co/mKW1r2kssk

Team Australia were expected to take control over the game after declaring in the second innings. However, the decent start of Rohit Sharma and Shubman Gill followed by a massive partnership between Pant and Pujara, helped team India to go for a win.