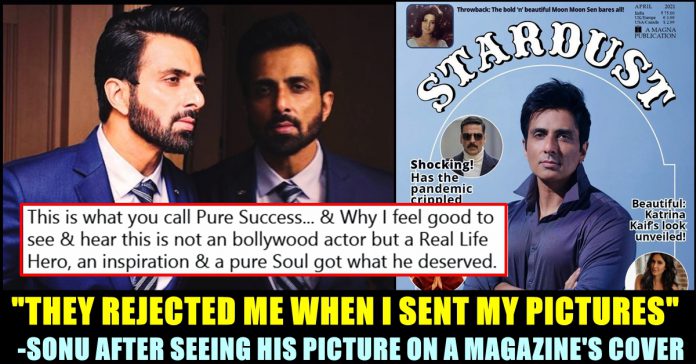 Bollywood actor Sonu Sood’s tweet after getting featured in the cover of “Star Dust” magazine garnered huge reception among the users of social media platforms. He who is known among audience for appearing in films as a negative character, is being hailed by the public as “Messiah” which means saviour and a number of people demanding the government to provide him “Bharat Ratna” to honour him. He has been helping people who are reaching him since the emergence of COVID 19 virus in India. On seeing him having n heart to serve people, a number of social media users also asked him to contend for the post of India’s Prime minister.

The “Osthi” actor being lauded by the entire country for his service to poor, helpless people amidst lockdown crisis. It all started when he stretched his supportive hand to migrant labourers who struggled to reach their him due to the abrupt lockdown announcement by Prime minister Narendra Modi. Followed by it, the star started helping whomsoever reaching him out through the micro blogging social media site seeking financial help. During the second wave of COVID 19 virus, Sonu is helping people to get oxygen cylinders and other hospital facilities.

A couple of days ago, Sonu Sood shared an interesting fact about himself. The actor revealed how he used to send his photographs to a famous magazine for audition purpose. Sonu says that he would get rejected at that time by adding a picture of the magazine using his photo as their cover. “There was a day when I had sent my pictures from Punjab for an audition of Stardust, but got rejected.
Today want to thank Stardust for this lovely cover. Humbled” read the caption of the post of Sonu Sood.

There was a day when I had sent my pictures from Punjab for an audition of Stardust, but got rejected.
Today want to thank Stardust for this lovely cover.
Humbled ❣️🙏
@sumita11 @Stardust_Magna @vedishnaidu @ashok_dhamankar pic.twitter.com/lQj6CLgxg3

Sonu Sood started his career in film industry in late 90s as a supporting artist. He acted in Vijay’s “Nenjinile” and a Tamil film named “Kallazhagar”. He then appeared as an antagonist in the Telugu film Hands Up! in 2000. In 2001, he appeared in Prashanth’s “Majunu”. He then began starring in Hindi films, with Shaheed-E-Azam, as Bhagat Singh in 2002. Sood earned recognition as Abhishek Bachchan’s brother in Mani Ratnam’s Yuva in 2004 and in Aashiq Banaya Aapne in 2005. Through his acting skills and appearance, Sonu got opportunities to share screen space with Salman Khan, Hrithik Roshan and many other high profile Indian actors.

On seeing the above post, many people lauded the 47 year old for his achievement. “Sir, this is called the change of time. Your hard work and dedication have brought you to this point today..” a social media user wrote with many others posting similar replies.

Sir, this is called the change of time. Your hard work and dedication have brought you to this point today..👏👏👏

It's for ur hard work & dedication….it's not easy for what u have done & doing……for me … Bollywood has many actors but just one hero

This is what you call Pure Success… & Why I feel good to see & hear this is not an bollywood actor but a Real Life Hero, an inspiration & a pure Soul got what he deserved. Universe still is with HUMANS. I can believe

Previous articleBalaji Released The Video Of His “Behindwoods” Speech !!
Next articleDavid Miller Replied To A Tamil Fan Who Questioned On His “WWE Style” Entry !!

Responding to the accusation of Anitha Sampath, Producer Ravinder Chandrasekhar who reviewed the Bigg Boss show in daily basis, came up with a series...