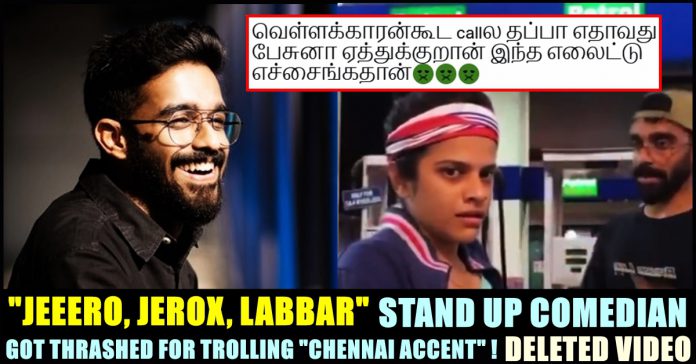 Stand up comedian Abhishek Kumar who is known for his Instagram reel videos, deleted his recent one after receiving flak from his own followers. In the video he made with Maya S Krishnan, Abhishek tried to create humour by recreating the “slang” words Chennai people use. Titling the video as “Sexy Chennai Accent”, the duo made fun of Chennai people who utter the English words in a wrong way. The video created huge outrage among his followers which made the creator to delete it and seek apology.

Abhishek Kumar is enjoying one and half lakh plus followers for his official Instagram account and identifies himself as an actor, Stand up Comedian, Writer through his bio. He had uploaded 300 plus posts and his recent reel on “Famous Sounds Of Instagram” went insanely viral with many cinema celebrities sharing it in their stories and timelines. Lately, he came up with his next video, depicting how people of Chennai utter particular English words as per their comfort.

With Maya S Krishnan, the comedian pronounced “April” as “Aaapral”, “Station” as “Tation”, “Xerox” and “Jerox”. The duo went on to say “Sachin Tendulkar” and “Sachun Tendulkar”, “Poori” as “Boori” and “Office” as “Obees”. They also trolled the people of Chennai for calling “Kamal Haasan” for “Kamalagaasan”, “A.R Rahman” as “A.R Ragumaan”. “Jero”, “Lubber”, “Mitchar” took place in their video as well.

“These two “artists” who made that ‘your chennai accent is so sexy say it again’ reel is so unfunny I can’t-“ a twitter user said to express his/her displeasure over the reel video whereas another one said “We don’t say it as aaapral it’s just April, my school aayammas speak better english then you guys..”

We don’t say it as aaapral it’s just April, my school aayammas speak better english then you guys..

Not funny. Didn’t laugh. Not a chuckle. Not a giggle. Not a single haha. Not even a hehe. Not a slight smile or a smirk. Not one bit of that was funny or amusing. I’m not laughing. No one’s laughing.

Before mocking others english accent these shit heads should know that it is not Rahman,it is ரகுமான் in Tamil. Joke is on you fu*****. https://t.co/E4ZTfDrnxK

“Hi look at me. I’m perfectly educated and privileged. I see people who aren’t blessed with resources around me. I don’t help them correct their mistakes, I’ll pick that up and milk it in the name of crass comedy catering to elite audience. Give me more attention.” based comedy. https://t.co/oXu0Scm75P

Nobody says it as boori as long as I know… And stick this lame ass komedi in your ass https://t.co/geMhK0ppLv

This is so inappropriate at multiple levels, shows the filthy casteist mindset of both Abishek Kumar & Maya Krishnan. https://t.co/08tveigFNQ

Rahman is written ரகுமான் in Tamil, ryt? What’s their fucking problem with Tamil people calling a celebrity from Tamilnadu in Tamil?? https://t.co/QtIIgaNVBB

who told these people they are funny? also i’ve never ever heard anyone say april like that https://t.co/1pbFdlSrgE

Jokes on accents are rooted in privilege. It’s also rooted in colonialism in the sense that any bilingual person will develop an accent in the second language. Jokes like these started in counties where English is the first language. TDRL “You don’t sound like us. You’re weird” https://t.co/rZmogZbluV

Reacting to the outrage caused, Abhishek Kumar took down the video from his timeline and came up with a note saying “HEY GUYS. WE’VE TAKEN DOWN THE LAST REEL. AFTER UPLOADING WE’VE LEARNT THAT THE REEL WAS INSENSITIVE AND IT WAS NOT OUR INTENTION TO INSULT/MOCK ANYONE. WE WERE MERELY FOLLOWING THE INSTAGRAM TREND OF SEXY ACCENTS. APOLOGIES FOR THE SAME, WILL MAKE SURE IT DOESN’T REPEAT AGAIN. WILL DO BETTER NEXT TIME!”

Previous articleHave You Ever Wondered How Much These Stars Are Getting Paid To Host TV Shows ??
Next articleFamous Celebrity Called Out This Regressive Dialogue From “Dikkilona” !!

After Rajinikanth made his final call about his political stint, actress Kasthuri came up with a tweet quoting the public statements of the actor...