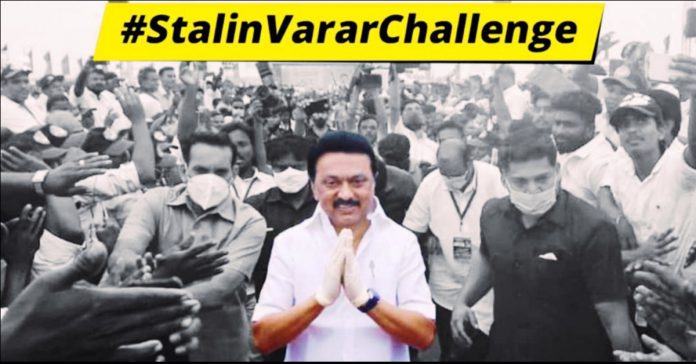 As Tamil nadu assembly election is approaching, political parties of state Tamil nadu are busy campaigning for their respective parties to gain votes from the public. DMK party which is known for its legacy, recently launched a initiative named “Stalin Varar Challenge” and demanded public to dance for a song which starts like “Stalin Thaan Vararu, Vidiyal Thara Poraaru” (Stalin is emerging, He is going to get us the dawn). The challenge became a subject to severe criticism among the public as they couldn’t bear seeing a traditional party like DMK involving in such activities with the instructions of IPAC (Indian Political Action Campaign).

It is notable that public, along with Chief minister Edappadi K Pazhaniswamy are criticizing DMK party as a corporate company. Now, for following the instructions of IPAC without reconsiderations, DMK became a subject to severe criticism. Employees who belong to North India are making important decisions which are meant for the Politicians and political leaders.

Now, the “Stalin Varar” initiative which looks like a Television dance reality show, has been launched by the DMK party. Through the initiative, DMK party demands people to dance for the song “Stalin Thaan Vararu, Vidiyal thara poraaru” and upload the videos in the social media platforms by tagging DMK’s “Ondrinaivom Vaa” page.

Watch the campaign video of “Stalin Varar Challenge” below :

To demonstrate the campaign, DMK has released a video which shows the employees of IPAC dancing for the song. The video has embarrassed many as a traditional Dravidian party has degenerated themselves by making a video that is on par with a theatre drama. Many other people expressed their disappointment over the party for stooping low and acting desperate to gain votes from the public.