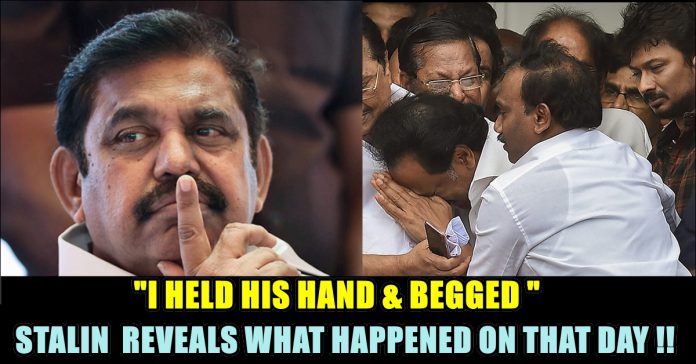 The Madras High Court order allowing DMK patriarch M Karunanidhi’s burial at the Marina beach led to emotional scenes at Rajaji Hall, where his body is currently placed for the public to pay their last respects. Karunanidhi’s son and party’s working president MK Stalin and other senior leaders burst into tears hearing the order. Karunanidhi passed away at the age of 94 at Kauvery Hospital last evening, where he was admitted after his health deteriorated two weeks ago. The court granted permission to bury Karunanidhi behind Anna Samadhi — the memorial of his mentor C N Annadurai — on Marina beach on Wednesday. Following this, Tamil Nadu Advocate General Vijay Narayan informed that the state government will not challenge the court’s order.

The court had commenced hearing an urgent plea filed by DMK lawyers seeking space near Anna Samadhi for their leader. The hearing was resumed  after the government sought additional time for arguments. The government opposed the plea citing pending cases against burial space at the Marina. It had instead allocated two acres of land at Gandhi Mandapam in Guindy. Hours after his father’s demise, Stalin wrote an emotional poem for his father asking: “This one time, can I call you Appa?” In the poem, Stalin recounted how he addressed his father as ‘Thalaivare’ (leader) more than father.

“Thirty-three years ago you decided the words to be written upon your headstone, ‘Here lies he who worked without any rest’. Did you leave with the satisfaction of having worked for this Tamil community?” Stalin asked, adding that Karunanidhi ran non-stop for 80 years to serve the public. “I beg for that strength and for the heart you borrowed from Aringar Anna. Will you give it to me, Thalaivare? With that charity, we will win over your unfulfilled wishes and dreams,” he wrote. Today in a meeting Stalin reveals what happened on the burial day between him and Chief minister Edappadi. He says “Through friends we let us know the government about the issue but no proper answer came in response. Then seniors said we have go approach them directly to get a solution.

Then I was ready to go meet them but some stopped me from meeting them saying that I’m a Seyal Thalaivar (Acting Leader). But I refused and went to fulfill our leader’s death wish. I said I’m ready to lose my respect for my leader. After meeting the chief minister we proposed our request but he refused firmly by reasoning legal opinion. Then I struggled a lot to get the permission from the chief minister , to be frank I held his hand and begged” said Stalin in the meeting.

Previous articleThe Proof For Why “Sathyam” Is Chennai People’s Emotion !! The Heart Melting Stories !!
Next articleRemember Ramesh Powar, Former Off Spinner Of Indian Team !! He Appointed As The Head Coach Till T20 World Cup !!

Among the many kind of reactions that are surfacing post the release of "Vikram", a set of people are trolling the journalists of "Valaipechu"...

Video Of A Man Dying While Trying To Take Selfie Released By Police !! Horrific !!

Social media plays such a big part of our lives that it’s considered ‘cool’ to upload every part of your life online. Selfies play...