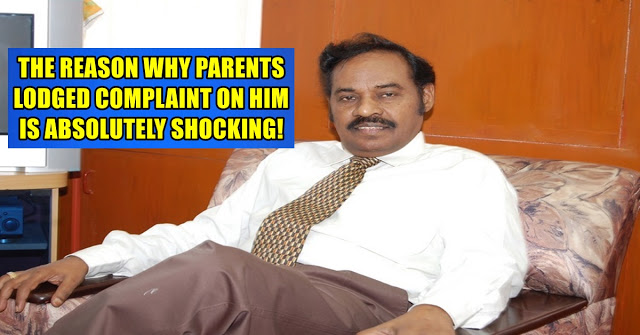 SRM Group Chairman Pachamuthu Arrested Over Cheating Case! The Reason Behind Is Shocking!

SRM Group Chairman T R Pachamuthu, who founded one of the most sought-after group of educational institutions in Tamil Nadu, was arrested by the Chennai city police on Friday.
He is one of the accused in 109 cheating complaints filed by parents who alleged that they had paid huge amounts for medical admissions in the group of colleges under the SRM Deemed University and other institutions run by SRM Group.
The trouble for Pachamuthu began when Kollywood film producer Madhan, who started his career as a college admission agent, mysteriously went missing on May 27. A note supposedly written by him in the letter head of his film production house Vedhar Movies surfaced on social media soon after.
The note suggested that Madhan, who was once considered close to Pachamuthu, was facing opposition from others within the SRM family, who disliked his growing closeness to the SRM chairman. While Madhan’s whereabouts remained unknown, despite strong directions from the Madras High Court to trace him, several parents who had paid lakhs of rupees to him hoping for admissions in the SRM Group of colleges started knocking on the doors of police with cheating complaints.
As on date, a total of 109 cheating complaints by parents were registered by the Chennai police. Police estimate that a total of Rs 73 cr was collected from the parents who have lodged the complaints.
Besides Madhan, the parents had named Pachamuthu and a few other close associates of him in the complaints. In the original FIR filed by the police, only Madhan and two others were named as accused and the ‘SRM Management’ was included as the fourth accused, without not naming any particular official of it.
But with the parents also approaching the Madras High Court and strong comments passed by the court last week, the police on Thursday questioned Pachamuthu in connection with the case.
On Friday, police sources confirmed that they have arrested Pachamuthu and will be producing him in a magistrate court at Saidapet.
The police team is expected to reach Saidapet court complex by afternoon. He has been booked under IPC sections 406(criminal breach of trust ), 34 (acts done by several person in furtherance of common intention) and 420 (cheating)
So far, four persons have been arrested in the case. They are Vijayapandiyan, an associate of Madhan, Dr Bargavan Pachamuthu, a medical doctor and also the medical wing state sectary of Indhiya Jananayaka Katchi (IJK) party (a party founded by Pachamuthu), Shanmugam, Madurai district sectary of the IJK party and Babu, Dindugal district secretary of IJK party.
However, the key person in the entire riddle, Madhan, is still missing. The last place police claim to have managed to trace his movement was to a lodge in the banks of River Ganga in the holy city of Varanasi, where Madhan’s note said he is headed to “attain samadhi”. In the note supposedly left behind by him, he had asked the parents of the students who had given money for admissions to him to approach the SRM Management. The note said that the SRM management that took lion’s share of the money given by the parents and hence they can claim it back from it.
Previous articleTop 5 Places Where You Get Yummy Food In Tambaram
Next articleActor Arun Vijay Arrested By Nungambakkam Police. The Reason Behind Will Make You Hate Him!

Actor and Director Parthiban who is known for the films he made in Tamil film industry, loves to play with words and is enjoying...