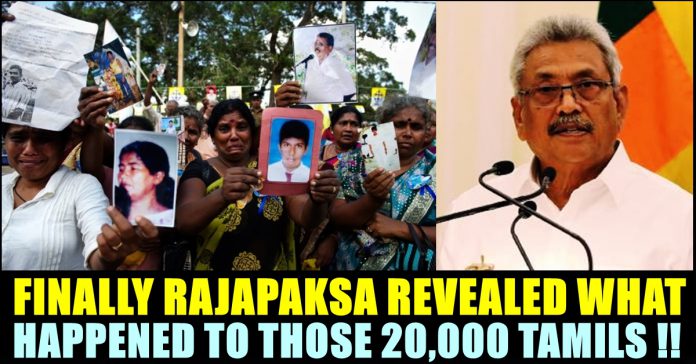 In the Sri lankan civil war which began on 23 of July in 1983, Liberation Tigers of Tamil Eelam (the LTTE, also known as the Tamil Tigers) fought against the government to create an independent Tamil state called Tamil Eelam in the north and the east of the island. After a 26-year military campaign, the Sri Lankan military defeated the Tamil Tigers in May 2009, bringing the civil war to an end.

Now for the first time, Sri lanka’s president Gotabaya Rajapaksa has admitted that more than 20,000 people who disappeared during the civil war are dead. The president made the remark in a meeting with the UN convoy in the capital, Colombo.

People who are related to the missed people are taking part in several rallies in a way of demanding the government to know the whereabouts of their loved ones. “Most of them had been taken by the LTTE (Tamil tigers) or forcefully conscripted. The families of the missing attest to it.” the statement from the president office said.

The war which took place between the majority Buddhist Sinhalese-dominated against the Tamil tigers who fought for a separate country, ended in 2009 with the defeat of the rebels. Atrocities carried out by government forces in the final year of the war are still considered as one of the worst human rights abuses in the history.

Relatives of the missing ones say that they handed over the hundreds of their family members after government forces asked those with any remote links to the rebels to surrender as they faced defeat in 2009.

The Sri Lankan government forces have also been accused of systematic impunity for serious human rights violations, lack of respect for habeas corpus in arbitrary detentions, and forced disappearances. The UN and other rights groups have asked the Sri lankan government to establish a war crimes tribunal to investigate the allegations of human rights abuse, both by the military and the Tamil rebels.

However the Sri lankan government resisted such attempts and said that it is a domestic issue and the allegations should be investigated internally. Mr. Rajapaksa is considered as a hero among the Buddhist-Sinhalese majority as his approach bought the war to an end.

Previous articleMysskin Shared About His Bold Decision Behind Vijay’s Blockbuster Song !!
Next articleGuy Proposed Mirnalini Through Instagram !! Check Her Reply !!

Prime Minister of Pakistan and former cricketer Imran Khan got trolled for his insensitive comment in United Nations General Assembly. The video which was...

In a recent interaction with Behindwoods youtube channel, actress Yashika shared about the traumatic experiences she came across before becoming an actress in the...

After Grabbing No.1 Spot, Sivakarthikeyan Lauds This Top Celebrity !!

Actor Sivakarthikeyan has been voted as the Chennai Times Most desirable Man of year 2019, followed by Music director Anirudh and actor Dhanush in...