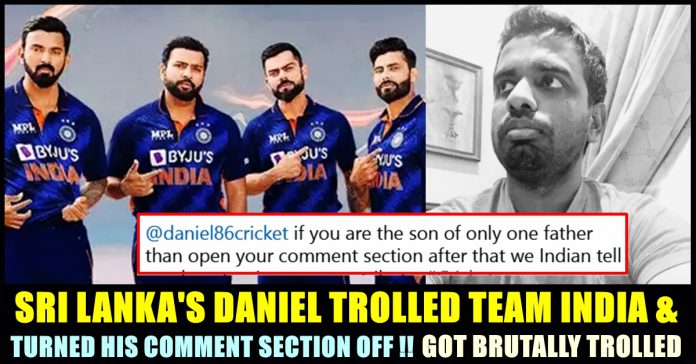 A tweet of Daniel Alexander about team India’s performance in the ongoing T20 world cup tournament triggered Indian fans. He compared India’s 10 wicket loss and 8 wickets loss against Pakistan and New zealand respectively with the match where they got all out for 36 runs to humiliate the Kohli led team. In the quoted replies, many fans of team India trolled him and vented their frustration out at him.

Daniel Alexander, whose Twitter bio says that he is a “Proud” Sri lankan, is very much popular for degrading Indian cricket team. In a post which was posted in the morning of November 1, he wrote “India lost to Pakistan by 10 wickets and then lost to New Zealand by 8 wickets. 2 defeats, 18 wickets (2×18=36) as a tribute to their 36 all out against Australia. #Cricket” to humiliate team India.

Though Daniel turned his comments section off for the post, he got thrashed by Indian fans through quoted replies.

A guy who is hiding his face when his very team is on the verge of getting out of this T20 World Cup. He predicted India being 0-5 vs in Test series 2021. How does he manage to survive even after so much insult? https://t.co/fOfstZnSii

At least Indians players never had their team bus attacked by Pakistanis. https://t.co/4gzO0xwbiX

@daniel86cricket if you are the son of only one father than open your comment section after that we Indian tell you how to give a proper tribute. #Cricket https://t.co/nW0j3tIh3O

Sri Lanka won't qualify. Focus on your team first. How coward of you to restrict the comment section. This shows how spineless you are. https://t.co/iP3Csy8ZsY

Dreams of team India winning the T20 world cup for the second time shattered after the Kohli led team faced a humiliating loss in their match against New Zealand. Cricket experts, fans, former cricketers and many others has been expressing their displeasure over the team which was expected to win the tournament.

Netizens questioned Dinamalar daily's twitter handle for photoshopping a picture that is available in internet and using it for a program they are conducting...