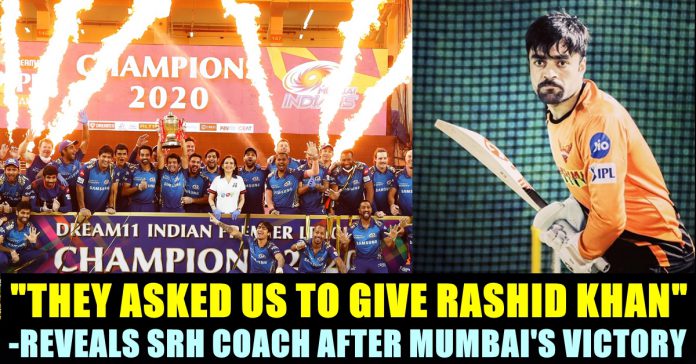 Mumbai Indians successfully clinched the title for the 5th time in IPL history. The team which looked the strongest during the league stage, effortlessly won the trophy by winning the qualifier and finals against Delhi Capitals. The Shreyas led team which lost 2 matches against the blue team during the league stage, lost the qualifier and finals to them and made it easy for them to call themselves as the best team of IPL history.

Since the victory of Mumbai Indians, fans of the game are involved in a debate over whether the team is astonishingly successful due to the brilliant captaincy of Rohit Sharma or due to the team work. Majority people accepted that the team consists a bunch of match winning players such as Bumrah, Hardik Pandya and others who were nurtured by the team management of Mumbai Indians themselves. However, we have to accept that their trading capability also plays a key role in the strong structure they display in every season. Last year, they traded Trent Bolt from Delhi Capitals and used him against them in the Qualifier and Finals.

He who received the man of the match award in the finals of IPL 2020, dismantled the Delhi top order in the qualifier by picking two wickets in the very first over. Similarly, in the year 2018, Mumbai Indians bought Quinton de kock from Royal Challengers Bangalore for Rs.2.8 crores. The South African keeper is currently opening for Mumbai Indians and is using the power play to its fullest.

Now, former coach of Sunrisers Hyderabad, Tom Moody has opened about the trading strategy of Mumbai Indians. He said that the team would knock the door of all the other 7 teams and would keep asking their players for trade. “Mumbai Indians is probably one of the most active teams with the regards to seeking trade opportunities. They are not afraid to knock on your door and ask for the ridiculous.” said Tom moody in the interaction with ESPN Cricinfo.

“They keep knocking on the door. If they keep doing that to 7 other franchises, they eventually going to get what they want. It may not be their first option but they will get what they want in the end” Tom Moody says in the live interaction that took place after the finals of IPL 2020.

He also revealed that Mumbai Indians would try to get the trades that seem impossible. He further went to reveal an incident where they tried to get Rashid Khan from Sunrisers Hyderabad while he was coaching the team. “Two years ago, I remember them requesting a trade for Rashid Khan. Really ?? No other franchise had the gumption to knock on the door and ask for Rashid Khan.” said Tom Moody. “It’s like, okay, Yeah, sure you do want him, so does the rest of the world” he cheekily said in the interview.

This evidently proves that a franchise should have the capacity to trade any player in the world at anytime to be as successful as Mumbai Indians. A latest report has suggested that a big auction is going to take place ahead of IPL 2021 and a separate Gujarat based franchise is going to be added in the IPL as 9th team. We have to wait till February to witness the trading capacity of every IPL team !!

This Double Standard From This Tamil Producer Thrashed By Online Users !! Check Out !!