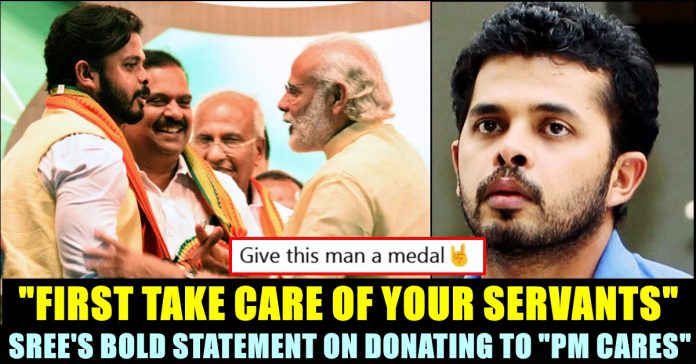 Former Indian cricketer Sreeshanth’s bold statement of celebrities donating to PM Cares and CM cares amidst the COVID 19 crisis has impressed the users of social media platforms. The fast bowler has asked the influential personalities to look after their friends, relatives and servants before donating lakhs of money to PM cares or CM cares. The 38 year old attempted to play the 14th edition of IPL tournament, has said that Prime minister or Chief minister couldn’t reach the people who are close to them but the one who is making the donation can.

Sreesanth was banned by the Board of Control for Cricket in India (BCCI) in 2013 for spot-fixing. His 7-year suspension came to end on 13th of September 2020. He is showing his desperation to play International cricket since his ban got lifted. He also wanted to represent a team in IPL 14. However, none of the eight IPL teams shortlisted Kerala based fast bowler in their team. He who recently made his comeback to cricket, uploaded a video in his official twitter handle in “Thala” style and confirmed that he will be back soon.

Now, as the country is fighting the second wave of the deadly COVID 19 virus, Sree santh came up with a thoughtful post in his social media account and impressed people. “Before donating to CM or
PM fund, please keep an eye around yourself that if any of your relatives, friends or servants are
proving to be economically weak in this war. First make them strong. Because only you can reach
them, not CM or Prime Minister” the cricketer said in his post which garnered humongous number of positive reactions from fans.

“That’s all heart. Good at least sometimes he thinks with his head AND heart.” a follower said to laud the cricketer whereas another one said “True .. help those who you can directly instead of putting your money in these big black holes ..”

Give this man a medal🤘 pic.twitter.com/Uezo1SIpmb

That's all heart. Good at least sometimes he thinks with his head AND heart.

Yes. There is a saying. Charity Begins at Home. If anyone from Family goes Hungry or needs help and we don't help, it is a shame. Like our PM went on Heling Sphere at the cost of his own People. Does 1.38 Billion Indians matter

True .. help those who you can directly instead of putting your money in these big black holes ..

It is notable that Sreesanth joined the Bharatiya Janata Party in the year 2016. He contested and lost the Kerala Assembly elections from Thiruvananthapuram. He secured a total of 34,764 votes but lost the election to VS Sivakumar of the Congress by 11,710 votes.