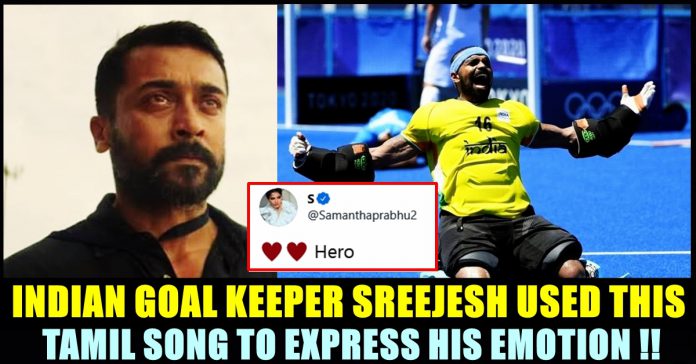 PR Sreejesh, goal keeper of Indian men’s hockey team expressed his emotion after helping the team to win a medal after 41 years by using a Tamil song. The 33 year old used “Kayilie Aagasam” from “Soorarai Pottru” and added a video of his father in one of his first tweets after tasting the victory, in a way of dedicating it to him. G.V Prakash kumar who composed music for the song dropped a comment, encouraging the athlete and actress Samantha shared the post and called Sreejesh, a “Hero”.

Country India’s Hockey team registered a 5-4 win against Germany team in their Bronze medal match in men’s category. On the match that took place at the Oi Hockey Stadium, Simranjeet Singh scored two goals with Hardik Singh, Harman preet Singh and Rupindra Pal Singh scoring each goals. Through this victory, India men’s hockey team ended their 41 year medal wait at the Olympics. The last time India won a match was in 1980 and the country won its 8th Gold at the Game.

With the efforts of all the players of team India, it was Sreejesh who ensured the victory for team India by saving a vital German penalty corner at the end. “It’s a rebirth. That’s it. It’s been 41 years. In 1980 we won the last medal and after that, nothing. Today when we won it, this gives a boost and gives energy to the youngsters to pick up hockey, play this game,” Sreejesh said after the victory. “This is a beautiful game. Now we are giving a reason for them (boys and girls across India) to pick up hockey… and make the country more proud,” he added.

Sreejesh added a tweet in his official twitter handle, dedicating to his father. The video showed Ravindran, whom Sreejesh considers as his hero, celebrating the historic achievement. In the 25 seconds long video, Sreejesh could be seen folding his hands together for a brief prayer with his family members, including Sreejesh’s wife applauding for him.

The most interesting point about the post is, the Kerala born added a Tamil song “Kayile Aagasam” from Soorarai Pottru” as background. “This medal is for you my achaaan ( father ) My hero, he is why I’m here” read the caption of Sreejesh’s post. Check out his post below :

This medal is for you my achaaan ( father )

My hero, he is why I’m here pic.twitter.com/1OdO5eZwaw

G.V Prakash kumar who composed music for the song, dropped a heart in the comment section to extend his support.

Previous articleThala Ajith’s Important Message To His Haters !!
Next articlePa. Ranjith Opened About The Message He Received From His First Film Producer !! WATCH

Mahat Says In BIGG BOSS About His Meeting With Kalaingar Karunanithi !! Watch Video !!

The heart breaking news of Tamilnadu former chief minister Kalaingar Karunanithi's death was announced world wide as soon as the leader died. To our...