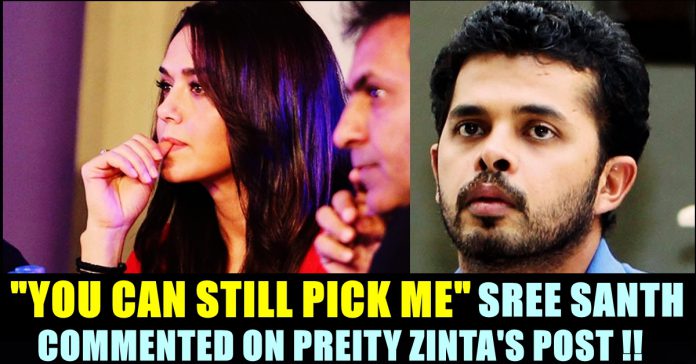 Pace bowler Sree santh is showing his desperation to play International cricket since his ban got lifted. The cricketer, after getting avoided by the IPL teams ahead of the fourteenth edition of the twenty twenty tournament, commented on the post of Punjab Kings owner Preity Zinta and asked her to pick him in her team. However, his comment got ignored by the Bollywood actress and grabbed the attention of the netizens.

None of the eight IPL teams shortlisted Kerala based fast bowler S Sreeshanth in their team. He who recently made his comeback to cricket, uploaded a video in his official twitter handle in “Thala” style and confirmed that he will be back soon. Sreesanth was banned by the Board of Control for Cricket in India (BCCI) in 2013 for spot-fixing. His 7-year suspension came to end on 13th of September 2020.

A total number of 292 cricketers went under the hammer at the IPL mini auction which was scheduled to take place on February 18 in Chennai. The eight franchises of the Indian Premier League had submitted the shortlist of players after 1114 cricketers registered their respective names for the auction.

Priety Zinta who bought, Jhye Richardson for Rs. 14 crore, Riley Meredith for Rs. 8 crore and Dawid Malan for Rs. 1.5 crore, uploaded a post in her official Instagram account on the day she landed in Chennai. She asked her followers to suggest the players to buy by writing “Landed in Chennai for the IPL auction. Super curious to know, which players would you like to see in the #PunjabKings jersey this year 🏏 Let me know folks – I’m all ears 🤩👊🙏 #PBKS #SaddaPunjab #iplauction #iplauction2021 #Ting”

Sree shanth who represented Kings 11 Punjab in the past, funnily wrote his name in the comment section in a way of suggesting her to pick him in her team. “But priceless As I’m not in auction nd yeah.. May be u can still pick me ..😍😍😍😍😎” the cricketer wrote in his next comment. “All the best have fun.. May God bless us all” his next comment read.

Check out the screen shots of his comments :

The Bollywood actress failed to notice the comment of Sree santh it seems. However, fans replied to the comments of Sree santh and boosted up his confidence level. “sree, you are a champion world cup winner.. you Dont need to beg to anyone to grab chances.. keep working hard opportunities will comes on time” wrote a follower to encourage Sree santh. Earlier, Reacting to the decision of the IPL teams, Sreeshanth came up with a video reply in his official twitter account.

He who was seen travelling in a car, played the famous dialogue of actor Ajith from his film “Vivegam”. “No matter what the world thinks about you, until you accept, no one can defeat you” Ajith would say in “Vivegam” and the pacer used it for his current situation.

“No one can defeat me. I will come back, definitely. Shree is gonna be back. Love you all. Love you for support. Trust me. I am not gonna give give up. Never, ever.” Shreesanth says in Tamil. “love u all.. it’s just the beginning..#grateful #blessed #bcci #family #kca #cricket” caption of his post read.

Previous articleFans Slammed Those Who Accused “Karnan Azhaippu” !!
Next articlePolice Got Suspended After He Received Kiss From A Girl As Bribe !! WATCH

BREAKING : Raina’s First Ever Emotional Post After Returning To India !!

Amidst the furore that took place followed by Raina's exit from the Chennai Super Kings team, the cricketer came up with a couple of...