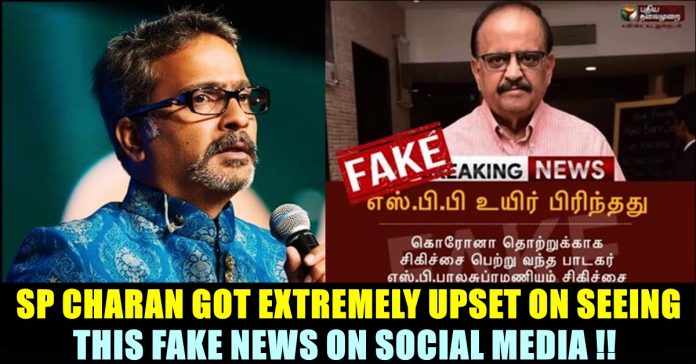 The news on Legendary Singer SP Balasubramaniam’s health status released on Internet by the hospital management and the entire film fraternity including Ilayaraja and A.R Rahman prayed for him to return with full recovery. Ilayaraja’s video of calling his long time friend as “Balu” melted the heart of the entire Internet users.

A.R Rahman posted a tweet, asking everyone to pray for the iconic singer. “I request all the music fans to pray for this legend along with me ..#SPBalasubrahmanyam ..he has given us so much joy with his amazing voice!” his tweet read.

I request all the music fans to pray for this legend along with me ..#SPBalasubrahmanyam ..he has given us so much joy with his amazing voice! https://t.co/8r2TjQe6wj

SP Balasubramaniam who was admitted to hospital last week due to COVID 19 infection, faced setback in the improvement of his health, according the statement released by Hospital management. The MGM Healthcare where the singer has been undergoing treatment for over a week, is currently critical and has moved to the Intensive care unit.

As soon as the news surfaced, people in social media started praying for the speedy recovery of the prolific singer who has sung more than 40,000 cinema songs in 6 languages in his career which spans nearly 54 years. Earlier, on 13th of March, a report emerged saying that the condition of the singer is stable and said that he is maintaining a normal oxygen saturation.

However, within hours of the report, the hospital management has released the press not saying that his condition is critical. “There has been a setback in the health of Thiru SP Balasubrahmanyam who had been admitted at MGM healthcare for symptoms of COVID since 5th August 2020. In a late night development on August 13, 2020 his condition has deteriorated. And based on the advice of the expert medical team attending to him, he has been moved to the Intensive Care Unit (ICU) and he is on life support and his condition remains critical. He is currently under observation by the team and experts from critical care and his haemodynamic and clinical parameters are being closely monitored.” read the statement of the hospital.

While every fan of the singer including film celebrities and politicians were praying, SP Charan, son of the veteran posted a tweet saying that the news published in Puthiya Thalaimurai channel is no correct. “The news that is out on #puthiyathalaimurai is not correct. #spb is critical but is in safe hands at #Mgm healthcare. We are all confident that #spb Will be back with all of us sooner than later. Thank you all for your concern and prayers.” he said in his tweet.

The news that is out on #puthiyathalaimurai is not correct. #spb is critical but is in safe hands at #Mgm healthcare. We are all confident that #spb Will be back with all of us sooner than later. Thank you all for your concern and prayers. 🙏

As soon as the tweet surfaced, Puthiya Thalaimurai channel replied with the original news they published and pointed out that it was done by some miscreants.

#puthuyathalaimurai has clarified that the #FakeNews did not originate from their channel. I’m satisfied with their prompt response tho this idiotic act by some miscreants. Let’s not spread #fakenews.

PLEASE DONT SPREAD FAKE NEWS!! Let us all pray for our beloved #spb saar to recover soon and come back and entertain us more🙏🏽🙏🏽🙏🏽 @charanproducer @deepaksub @Premgiamaren @Cinemainmygenes @krishoffl @actor_vaibhav

Meanwhile, a picture of SPB showing thumbs up to his fans from ICU, trending in Internet which consoled the fans of him.

A thumbs up from #SPB sir, even on a life support aided with a ventilator.

I'm sure you'll be back behind on mic signing.

Previous articleGirl Wants Sonu Sood To Fix Her Internet Speed !! Check His Reply !!
Next articlePeriyakulam Ordered People Not To Consume Meat Due To A Jain Festival !!

Fan Trolled This Scene Of Simran With Ajith Hilariously !! Simran Just Couldn’t Control Herself From Laughing !!

Simran, a popular actress in the Tamil film industry from the late 90s and early 2000s, is likely to be paired opposite Rajinikanth in...

On Monday, English all rounder Moeen Ali who is currently representing Chennai Super Kings in the ongoing IPL tournament, came up with an announcement...

Woman Stripped Inside Elevator To Avoid Going With Police & Caught In A CCTV Camera !!

The lobby of an apartment building in a posh Mumbai locality was the setting for high drama and fracas sometime last week. At the...