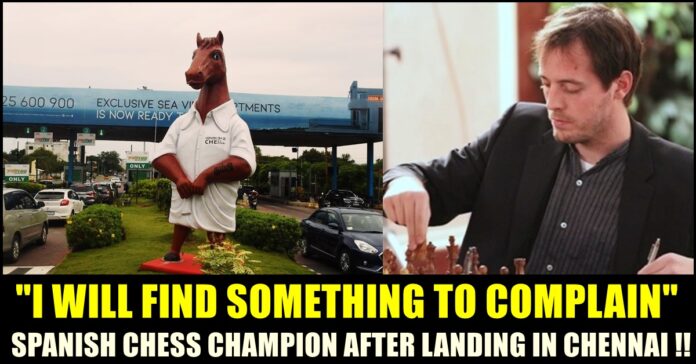 On seeing the arrangements that are made in Chennai for the 44th Olympiad, Spanish Chess Grandmaster Francisco Vallejo expressed his admiration. He who hailed the Olympiad Hall in Chennai saying that it looks like the best one he has ever seen, in a tweet, elaborately praised the organizers for giving him the best ever experience.

We wish the team good luck and success. pic.twitter.com/7agb3qkMx0

The Chess Olympiad is being held in Chennai for the first time and the tournament is expected to take place in Mamallapuram. Players from over 180 countries are participating in the Olympiad with three Indian teams each in the open and women’s sections.

Students in India’s Chennai created a mammoth chessboard and dressed up as game pieces ahead of the 44th Chess Olympiad pic.twitter.com/UOQ2iqDpE7

Prime minister Narendra Modi is going to inaugurate the event at the Nehru Indoor Stadium on 28th of July in the presence of Tamil nadu chief minister MK Stalin while the matches will begin from 29th July and ends on 10th of August.

Meanwhile, five-time Spanish Chess Champion Francisco Vallejo came up with a tweet in his official Twitter handle, expressing his admiration over the arrangements made in the city. The Chess player said that he would probably find something to complain about but didn’t face any issue so far.

The player also said that it is the fastest hotel check in experience he ever had. He further said that it is upto his performance in the game hereafter and seemed very much excited.

Painting streets in a chessboard pattern, a music video with AR Rahman and the mascot Thambi ubiquitous in Chennai. I just love how Tamil Nadu is promoting the 44th Chess Olympiad. pic.twitter.com/WGusElHx07

“Just arrived to the hotel in Chennai. It’s 5am. Probably i will find something to complain about haha, but so far , everything is just absolutely amazing. Incredibly warm welcome by all the volunteers and staff, fast immigration lines just for the Olympiad , the fastest hotel 👇 check in I ever had . Really happy to be here, now it’s just up to me not to blunder too many pieces 😉 and to enjoy my 10th!! #ChessOlympiad as a player” tweet of the champion player read.

check in I ever had . Really happy to be here, now it’s just up to me not to blunder too many pieces 😉 and to enjoy my 10th!! #ChessOlympiad as a player.

That looks like the best Olympiad playing hall ever ! #ChessOlympiad2022 pic.twitter.com/XYXuuqucNv

Reply section of his tweet was filled with the comments from the users of Tamil nadu warmly welcoming him. Here’s some of their reactions :

This really speaks a lot about the immaculate arrangements done by the Govt Of Tamilnadu … Kudos to the entire organising team of #ChessOlympiad2022 and hats off to our honourable CM @mkstalin 🙏🙏🖤🖤❤️❤️👏👏 https://t.co/eQHfwZFPgB