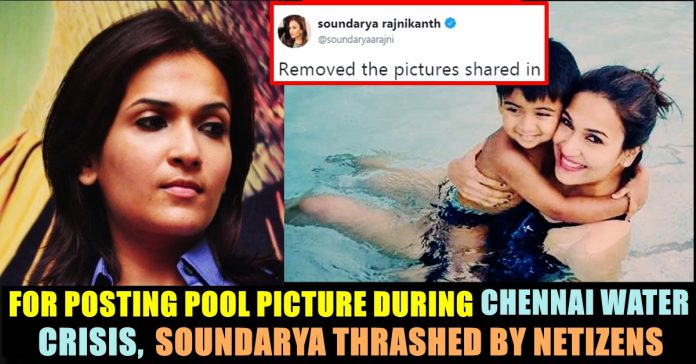 Soundarya Rajinikanth is a graphic designer by profession who also did movie producing and filmmaking. She primarily works in the Tamil film industry. She is very well known among people of Tamilnadu as one of the two daughters of Superstar Rajinikanth. The caption of her post read as “Teach them early … and they learn to shine by themselves !!! #Swimming is an essential activity !! #TeachThemYoung #KeepThemActive #WaterFun #EnsureSafetyAlways #NeverLeaveThemAlone #Motherhood #Bliss.” 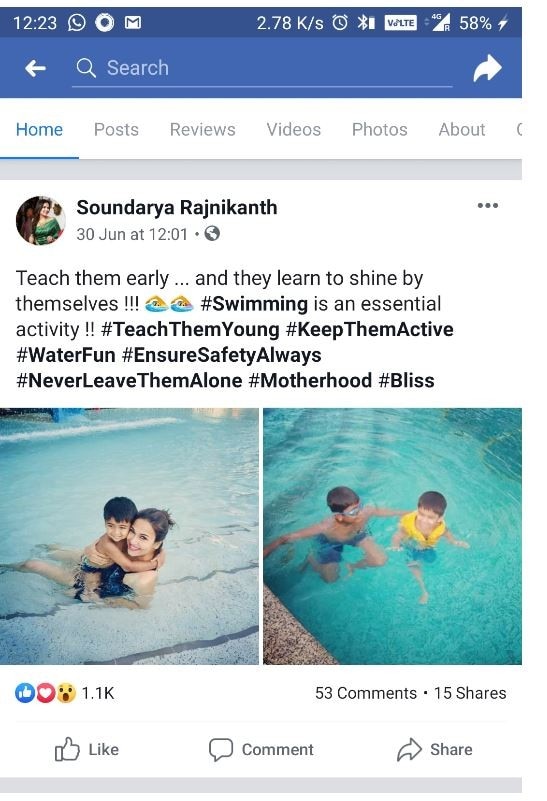 However she deleted the picture after facing the wrath of public who reminded her about the water crisis in Chennai. After realizing the outrage the post received, Soundarya decided to delete the picture and explained why deleted it.

In her tweet the “Kochadayan” director wrote “Removed the pictures shared in good spirit from my #TravelDiaries considering the sensitivity around the current #WaterScarcity we are facing 🙏🏻. The throwback pics were to emphasise the importance for physical activities for children from a young age only 🙂🙏🏻 #LetsSaveWater”

Removed the pictures shared in good spirit from my #TravelDiaries considering the sensitivity around the current #WaterScarcity we are facing 🙏🏻. The throwback pics were to emphasise the importance for physical activities for children from a young age only 🙂🙏🏻 #LetsSaveWater

Soundarya Rajinikanth married businessman Vishagan Vanangamudi on February 11 at Leela Palace in Chennai. The wedding and the reception were attended by eminent celebrities and politicians across the country. For the uninitiated, Soundarya had married businessman Ashwin Ramkumar in 2010 and were blessed with a baby boy named Ved in 2015. However, due to the irreconcilable differences, the couple got divorced.

Soundarya who loves to share the picture of her growing son recently posted a picture with a caption saying “Well … like that like grandson !!! #RajinikanthLineage #VedNailsThathaPose #ProudMother (sic)”

Check out some of the reactions for her recent post :

Being a daughter to Rajini is difficult

So if chennai faces water crisis, people should stop holidaying, and even if you do visit a pool in US, do enter the pool as chennai has water problem…shame

What do you think on this gesture of Soundarya ?? Comment your views below !!

Previous articleRohit Sharma’s Epic Reply To Reporters When They Asked About Rishab Pant !! WATCH !!
Next articleDhoni Actually Took Revenge On Pakistan For 2009 Champions Trophy ?? This Kollywood Director Thinks So !!

Sindhubaadh is an upcoming Indian Tamil-language action thriller film written and directed by S. U. Arun Kumar which is produced by S. N. Rajarajan...

Actor Amala Paul, in a shocking statement, has revealed that she was thrown out of Vijay Sethupathi’s upcoming Tamil film, dubbed as VSP33, because...