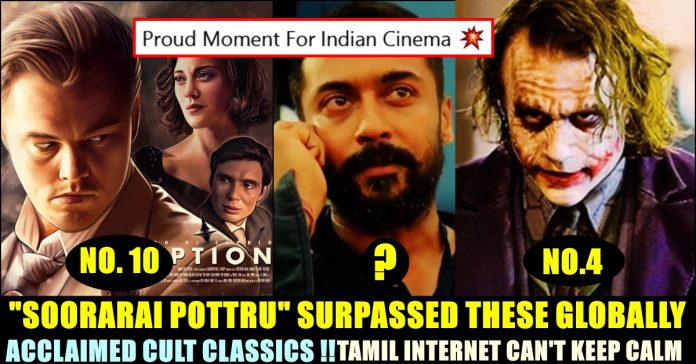 Suriya starring “Soorarai Pottru” surpassed some of the greatest films that were made in the history of world cinema and grabbed the third spot in the list of IMDB’s top 1000 films. After Frank Darabont’s “The Shawshank Redemption” and Francis Ford Coppola’s “God Father Part 1”, it is Sudha Kongara’s “Soorarai Pottru”. Along with fans, Telugu actor Allu Sirish, Pan Indian actress Samantha Ruth Prabhu and many others got excited on knowing about the achievement of the Suriya starrer and has been lauding the makers of it for providing a quality film that challenges world cinema. It is notable that the makers screened the film at “Oscars 2020” to get it nominated at the “Best Foreign Language Film” category.

The film which is inspired from the life history of Air Deccan founder G.R Gopinath, was touted to be a coming of age biographical drama. It is very well known that Gopinath is a retired Captain of the Indian Army, an author, and also a politician. Directed by Sudha Kongara who stunned audience with her “Irudhi Chuttru”, the film “Soorarai Pottru” is bankrolled by Suriya himself under his own banner 2D entertainments. Due to the corona outbreak, Suriya decided to release the movie directly on Amazon Prime.

We made it to the top 3 in IMDb because of you! Maara sends his love and affection to everyone for the overwhelming support even after 6 months of release! #SooraraiPottru🔥#Top3InTheGlobalIMDb pic.twitter.com/u7gDXkhFU6

“Soorarai Pottru” became the first Tamil film to have a background of flight, airport and airlines as its core plot. The film’s content impressed fans and critics big time during its release time. Now, it has been reported that the film reached the top third spot in the IMBD list surpassing some of the world class films that has cult following. The film has garnered 9.1 rating from the users of the site which left the fans of Tamil cinema excited.

“As a Suriya sir fan so happy to read this. Loved everything about #SooraraiPottru. It’s a film that deserves all these accolades and more.” wrote Telugu actor Allu Sirish with many other fans expressing their excitement. Check out some of the reactions below :

As a @Suriya_offl sir fan so happy to read this. Loved everything about #SooraraiPottru. It's a film that deserves all these accolades and more.https://t.co/SSIrP0coXw

Wow! #SooraraiPottru is now the 3rd highest rated movie on Imdb, Worldwide. Aren't we as Indians supposed to be proud of this feat? Crazy! #Suriya ✈️✊

#SooraraiPottru / #Udaan is now third most rated film in the world in @IMDb with a score of 9.1 after #shawshankredemption and #Godfather 😎. Film also got selected to Prestigious Shanghai Film Festival now! Pan Indian Blockbuster 🌟#Suriya #SIFF pic.twitter.com/OGq2UvbYrW

Previous articleOnline User Criticized Losliya For Conducting Photo Shoots Amidst Pandemic !! Check Out The Reply Of Her
Next articleCelebrities Called Out The Creators Of This Video Which Involves Kids !!

The match between India and Australia that took place yesterday, had so much drama for the cricket lovers especially for the Indian fans to...