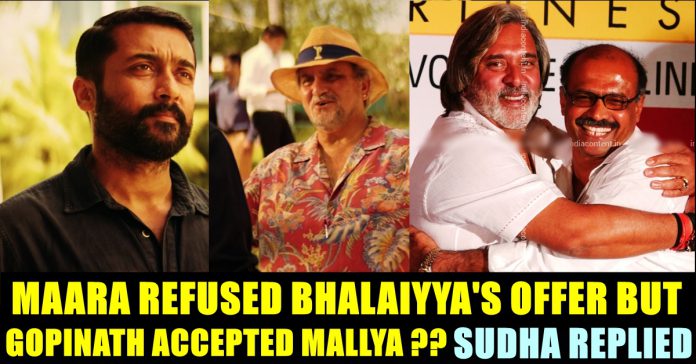 Suriya’s “Soorarai Pottru” released in Amazon Prime only to make the fans of Tamil cinema go gaga over it. It became the first Tamil film to have a background of flight, airport and airlines as its core plot. On seeing a top-tier actor’s film getting released after a very long time due to COVID 19 outbreak, fans of Internet became extremely happy and watched the film overnight. Reviews for the film are pouring from all the directions of Internet.

Among the various kind of reactions this film is receiving, a set of people are debating over the authenticity of the film’s plot with regards to the real life of Captain G.R Gopinath. In a scene, when the protagonist’s Deccan Air becomes a failure, he is forced to negotiate with a businessman named Bhallaiya to sell his Airline. However, the businessman who resembles the looks of Vijay Mallya of Kingfisher, offers Rs.16 crores for his Airline and says that his Deccan Air will be accessible only for the rich people. Maara immediately refuses the offer of Rs.16 crores and says that he is a socialist unlike Bhallaiya who is a socialite.

On the contrary, in real life, Gopinath sold off his airline to Vijay Mallya in the year 2007. Reports suggests that he sold his Air Deccan to Kingfisher for Rs. 1000 crore. Recently, Gopinath felt that he would have not let Mallya take control of Air Deccan. He said that the owner of Kingfisher completely changed his business model.

A twitter user named as “Kaipulla” also pointed out that the film shows the protagonist who represents Gopinath was shown as poor. He said that Gopinath was already one of India’s largest air charter operators, with a lot of planes in operation when Air Deccan was initiated.

Similarly, it shows a poor man, like Gopinath, who came from absolute poverty to start an airline without any help.

Again, in the real world, when Air Deccan started, Gopinath was already one of India's largest air charter operators, with a lot of planes in operation.

However, Sudha Kongara, director of the film, has already made it clear in several interviews that the film only got inspired from the sequences that took place in G.R Gopinath’s life and not a biographical picture of him. She also added a card before the start of the film saying that the film is a fictionalized version of a true story.

“Some of the incidents, characters, events etc in the film have been changed for cinematic/dramatic appeal and effect. This film, though made in consultation with several persons involved in the incidents, does not warrant, represent or claim to be historically accurate” reads the card which was included before the start of the film.

Check out the screenshot of it below :