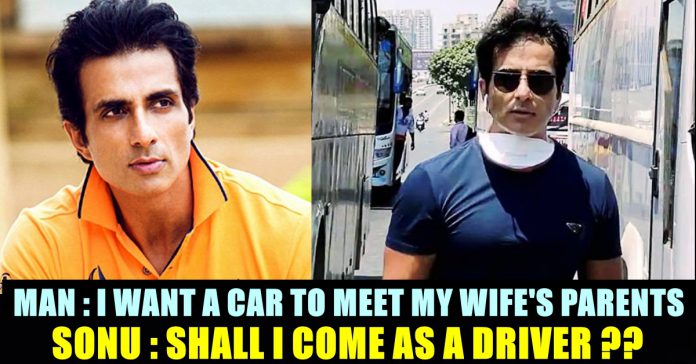 Among the genuine request from the Twitter users to Sonu Sood, there are few miscreants being active only to get attention which results in tweets of people who are in desperate need goes unnoticed by the actor who is actively involved in serving people amidst the lockdown situation. The latest tweet he posted said that he received 1137 mails, 19,000 facebook messages, 4812 Instagram messages, 6741 twitter messages seeking help from him.

“On an average these are the number of requests I get for HELP. It is humanly impossible to reach out to everyone. I still try my best.
Apologies if I missed your message” the actor wrote in his tweet.

Today’s HELP messages.
On an average these are the number of requests I get for HELP. It is humanly impossible to reach out to everyone. I still try my best.
Apologies if I missed your message🙏

While the actor is receiving this much messages in daily basis, people who are mentioning him for fun sake are also existing in social media. Not many days ago, a school student asked Sonu Sood to give him a PS4 to play to kill time during his quarantine period. A young woman asked him to help in increasing her Internet speed. The actor spent his precious time to reply to these kind of requests in a way of denying their requests. Read : Boy Asked Sonu Sood To Buy Him Rs. 28,000 Worth PS4 !! Check The Actor’s Reply

Now, a guys named as “Karan Jain” asked Sonu Sood to arrange a car for him to visit his wife’s grandparents. He who said that he will drive the car by himself, said that he wants to go to Rajasthan on 20th of September. The tweet grabbed the attention of the “Osthi” actor.

The user deleted his tweet as soon as Sonu took notice and replied to it. The actor, in a sarcastic tone said that Karan doesn’t needs to go by self driving as he himself will drive car for him. The actor also asked which car he wants and the AC temperature he wants to maintain to troll him. Read : Girl Wants Sonu Sood To Fix Her Internet Speed !! Check His Reply !!

“Why self drive? I will drive you down.. kindly let me know which car you prefer and what AC temperature you would like me maintain?” read the reply tweet of Sonu.

Why self drive?
I will drive you down..
kindly let me know which car you prefer and what AC temperature you would like me maintain?😜🤣 https://t.co/MWbuspEJf0

Previous article“I Have Advised Her To Stop It Completely” – Director Prabhu Solomon !! WATCH
Next articleBigg Boss Kaajal Called Out A Guy Who Made Obscene Comment !!