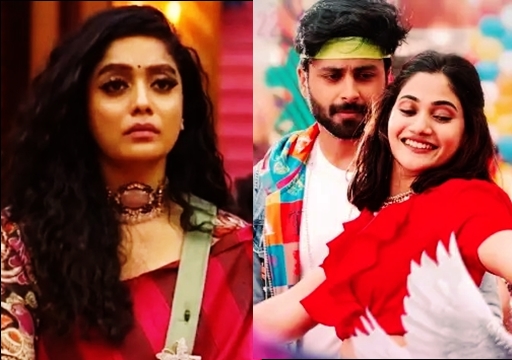 On seeing Abhirami Venkatachalam dancing with Shariq for “Baby Ne Sugar” song, fans questioned how the “Nerkonda Parvai” actress who is currently staying inside Bigg Boss house for the past two months danced for a song which was released only on Wednesday. Shariq uploaded the video in his Instagram handle and followers questioned Vijay Television how could it happen.

“Baby ne Sugar” single starring Ashwin of “Cooku with Comali” fame and Losliya of “Bigg Boss season three” released on 30th of March. The 5 minute long song garnered million plus views with trending at no. 1 for music currently in YouTube.

Among the money who has been sharing the song, Shariq who rose to fame among Television audience through his “Bigg Boss” and “Bigg Boss Jodigal” stint, uploaded a video of himself and Abhirami Venkatachalam recreating the steps of the song. “Baby Nee Sugar song Just for @iamsandy_off ❤️😎” Shariq said through his caption while sharing the video.

Here’s the video uploaded by Shariq :

Abhirami is currently contesting for the title of Bigg Boss Ultimate version. Fans believe that there is no chance for the actress who has been participating in the show since the end of January, to become aware of the song. Many flooded the comment section of Sharuq’s post asking how could she perform for the song which was released just two days ago.

Few even asked whether she got evicted from the show and wondered she could still be seen spending her time in the live of Bigg Boss ultimate which us streaming in Disney plus hotstar. 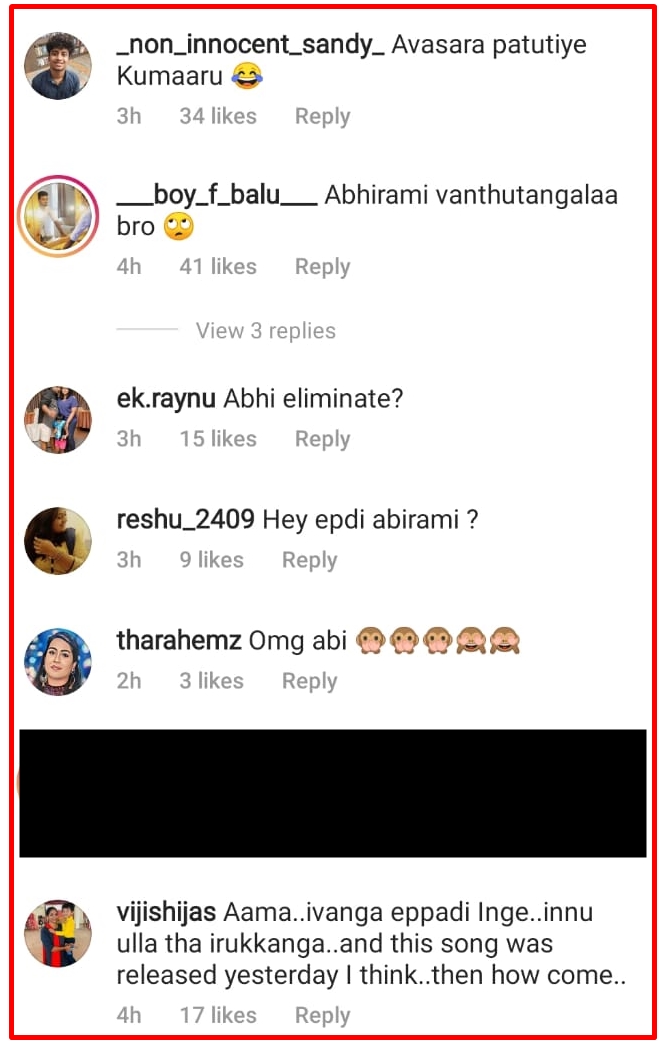 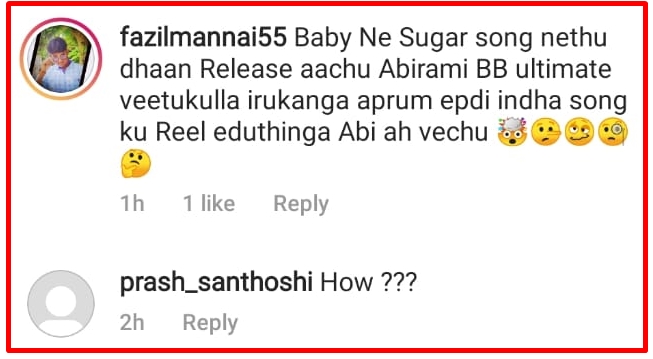 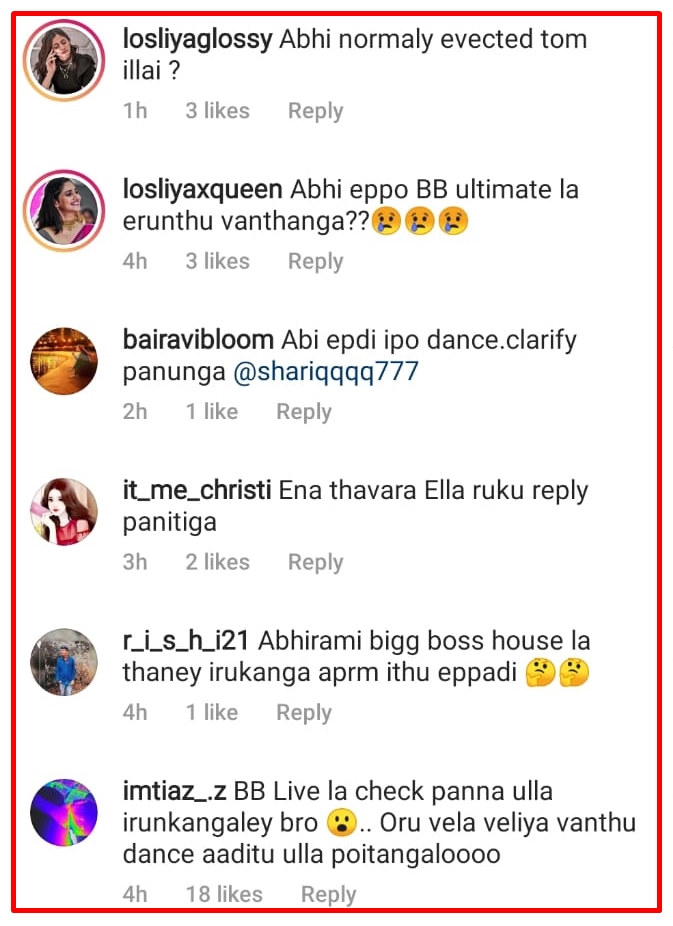 Even actress Losliya who performed in the original song shared the video in her Instagram and asked “when it happened? “. 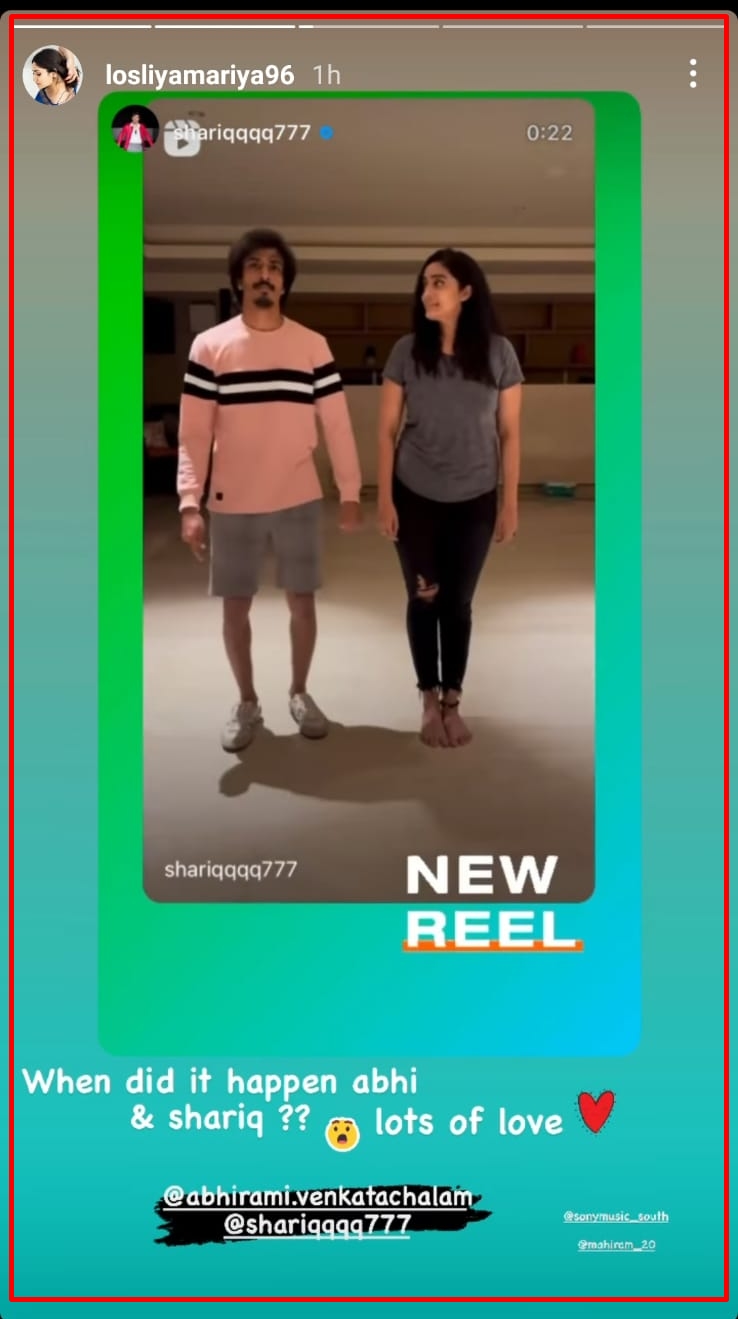 Shariq got eliminated from the Bigg Boss ultimate weeks ago and Abhirami who shared a strong bonding with him, said that she only met Shariq a couple of times before. A number of fans also believe that Dance Master Sandy who choreographed for the song could have acted as the connecting point as he share equal bonding with Abhirami, Losliya and Shariq.

Previous articleWATCH : Irfan Opened On How He Felt After His Channel Got Terminated!!
Next articleMemes & Trolls On Vijay Eating 100 Rs. Biryani Are Trending!!

Hours after Srilanka's former Prime minister Mahinda Rajapaksa submitted his resignation, his Karunagala based house was set on fire after the protest against government...