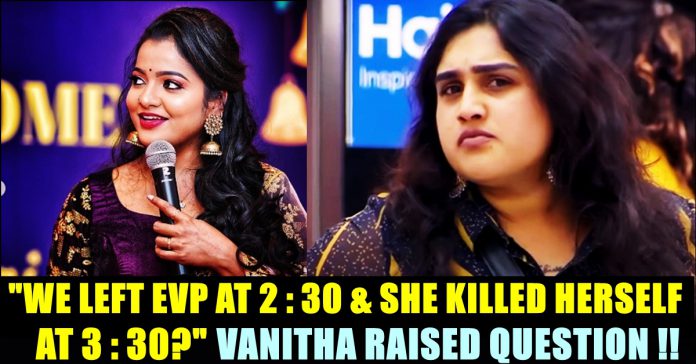 Former Bigg Boss contestant and actress Vanitha Vijayakumar uploaded a couple of tweets raising questions regarding the media reports on Chithra’s demise. She who firmly believes that it could not be a suicide, disclosed the details on her last meeting with the “Pandiyan Stores” actress. Vanitha had said that concluding the death of Chithra as “suicide” doesn’t makes sense and added that “something is fishy”.

Former video jockey and Television actress Chithra found dead in her hotel room on the wee hours of Wednesday. Police reports had suggested that Chithra checked into her hotel room around 1 AM on Wednesday. “The hotel manager called the Police helpline number 100 about 3 : 30 a.m on Wednesday. We are currently investigating the cause of her death,” said a police official of Nazrathpet station, according to The News Minute.

Hours before her demise, Chithra shared pictures and videos in her official Instagram account where she enjoyed 15 lakh plus followers. Chithra’s role in “Pandiyan Stores” serial gained her widespread acclaim among TV audience. Many fans, friends and colleagues of Chithra expressed their shock after hearing about the news.

Meanwhile Vanitha Vijayakumar who is also working with Vijay Television, posted a couple of tweets saying that something in Chithu’s demise is fishy. She said that it is the most shocking news she heard in this year and shared about her meeting with the deceased last week when she made her presence in the “Kalakapovathu Yaru” set as a guest.

This is the most shocking news I heard this year…#Chithra what happened..just met her in #KPY last week she came as guest..most vibrant ,bold ,beautiful and happy girl.i told her she reminded me of @reshupasupuleti . suicide…doesnt make sense …something else is very fishy..

Followed by this, Reshma posted another tweet revealing what was she doing last night. Vanitha disclosed that Chithra was shooting for Vijay music last night. The shooting of the program took place at EVP film city where Vanitha was also shooting for “Kalakapovathu Yaaru”. They both left the place around 2 : 30 AM, according to Vanitha. “she drove to her hotel and killed herself???soo wrong…noooo doesnt feel right …very disturbing and she is so alive in my eyes…what a shame” the youtuber said in her tweet.

She was shooting for star music last night ..neighbouring set to kpy in evp where I was shooting last night same time 230 am we left …she drove to her hotel and killed herself???soo wrong…noooo doesnt feel right …very disturbing and she is so alive in my eyes…what a shame

Chithra was admitted in a nearby government hospital where she was declared dead by the doctors. Later, her body was sent to Kilpauk government hospital for post mortem. The report of Thanthi suggests that Chithra and Hemnath were involved in an argument last night. In the preliminary investigation, it has been reported that the cause of Chithra’s death was suicide as the bathroom door was locked from inside. However, the results of post mortem is awaited.

In an Instagram story she uploaded hours before her death, Chithra could be seen talking on her phone.

Check out the video story below :

She was happily posing . . 😭😭😭 pic.twitter.com/hBKrm6CfqS

Previous article“Akka We Were Happily Dancing & Singing Together Yesterday” – Sivangi Of “Cooku With Comali”
Next articleThis Eliminated Contestant Is Going To Re-Enter The House Soon !!

Actress Kasthuri who is expressing her political and social views through her official twitter account for quite a few years, recently posted a...

“Are You Using Vijay’s Name For Publicity ??” – Preethi Questioned Her Husband !! WATCH

After participating in Bigg Boss show, Sanjeev participated in an interaction with his wife for a youtube channel and talked about his experience inside...

Vijay’s Bigil hit the screens on 25th of October and was watched by millions of people. No words could describe the craze level that...