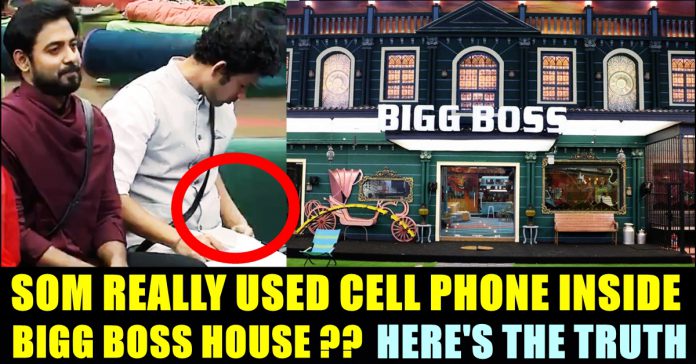 A speculation is doing rounds doubting whether Soma shekar who is one of the contestants of Bigg Boss show, is using cell phone inside the isolated house that is specially made for the cash-rich show. It is widely believed that Bigg Boss contestants are not using any such gadgets and are restricted from communicating with the outside world. Now, this video which is doing rounds, had people to raise questions about the authenticity of the Kamal Haasan hosting show.

Bigg Boss is a reality game show that is being hosted by political party leader, actor and filmmaker Kamal Haasan. The show will see 14 plus celebrity contestants locked into a house with weekly elimination based on audience’s vote. The one who survives till the 100th day with highest number of votes will be announced as the winner. So far, aspiring model and actor Aarav, “Madras” fame Riythvika and Malaysia based singer Mugen have won the titles.

However, a recent video clipping of Somashekar raised a strong question among the netizens. According to them, the video shows Soma shekar who is sitting beside Aari, using a cell phone and scrolling it. Watch the video below :

Memes, reactions started flooding the feeds of social media platforms regarding the same after the video got surfaced. “It seems he is scrolling memes, he could have been watching out tweets” said a follower on seeing the video whereas another one asked Vijay TV to give explanation.

@vijaytelevision u need give use explanation !!!!

We have been believing the show !!!

However, many others believed that Som is cleaning the water from his dhoti which got shed while drinking water. “If mobile is used inside BB house, there will not be any favoritism, groupism, hatred, arrogance, fight, critics etc.,” said a follower.