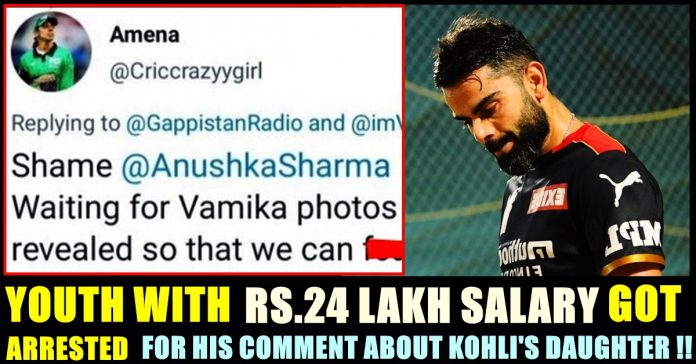 Details about the man who made rape threat to Indian Captain Virat Kohli’s daughter on Internet are out. The 23 year old youth named Ramnagesh Akubathini is a software engineer who completed his under graduation from the Indian Institute of Technology, Hyderabad, Telangana. He recently got arrested by the Mumbai Police after issuing an online threat to Virat Kohli’s baby daughter Vamika followed by India’s loss against Pakistan in the ongoing T20 world cup tournament.

After completing his degree two years ago, the accused has been working with a top food delivery firm headquartered in Bengaluru. Reports suggests that he had an annual package of Rs. 24 lakh at his job but quit his job as he wanted to pursue master’s degree in the United states. Parents of Ramnagesh said that they are not aware of their son’s online activities and came to know about his behaviour only after Police showed up at their door.

Ramnagesh is a resident of Sangareddy area in Hyderabad, Telangana and was arrested by a special team of Police on Wednesday, 10th of November. The online threats he made targeted 10 month old baby of Virat Kohli who has a house in Mumbai, said Police. The incident took place on 24th of October and the case was registered by the cyber police on behalf of Virat Kohli.

After the twitter account named “@Criccrazygirl” handled by Ramnagesh who pretended to be a Pakistani fan, had issued an online rape threat to Kohli’s new born daughter and the manager of the cricketer filed a complaint on 24th October. Filing an FIR, the police accused Ramnagesh under various sections of the Indian Penal Code, including 354-A (sexual harassment), 506 (criminal intimidation) and 500 (defamation) and other relevant sections of Information of Technology act, according to repors.

Reports said that the comment was made by the individual due to the statement he made supporting his teammate Mohammed Shami when he received hatred from a set of people after India lost against Pakistan. Check out some of the reactions that surfaced in Internet after Ramnagesh’s arrest :

A potential rapist, a hate-monger and an IIT graduate Ramnagesh Srinivas Akubathini has been arrested for giving rape threats to the infant daughter of the Indian cricket captain Virat Kohli.
He did it because Kohli spoke against islamophobic trolling of Mohammed Shami.

So Ramnagesh Akulabathini is an IIT graduate from Hyderabad..his tweets showed his appreciation for bandi sanjay and lakshmi manchu

He got arrested for making disgusting comments on Kohli' s daughter..Feel sorry for his parents for what they are going through ..

So the only time men are arrested for threatening/abusing/harassing online is when they target Dhoni’s or Kohli’s infant daughters. Not that they shouldn’t be – but do the rest of the times not count? Also hope nobody is nursing the galatfehmi they’ll learn from this arrest?

Man arrested for rape threats to Virat Kohli's 9-month-old daughter is an IIT Grad with a last drawn salary of around 2 Lacs per month.

Degree as they say is just a piece of paper. Real education should reflect in a person's behaviour. Shoot the bastard for this thought alone!

Previous articleJUST IN : Suriya Replied To The Allegations Of Anbumani Ramdoss!!
Next articlePakistan’s “Bye Bye India” Tweet Is Trending In Internet After Their Defeat Against Australia !!

Actress Samyuktha Hegde who is known among Tamil audience for acting in a film titled "Comali", gave back to one of her followers who...

Susi Ganesan Threatened This Leading Hero For Supporting #MeToo Movement !! Check What The Actor Has To Say !!