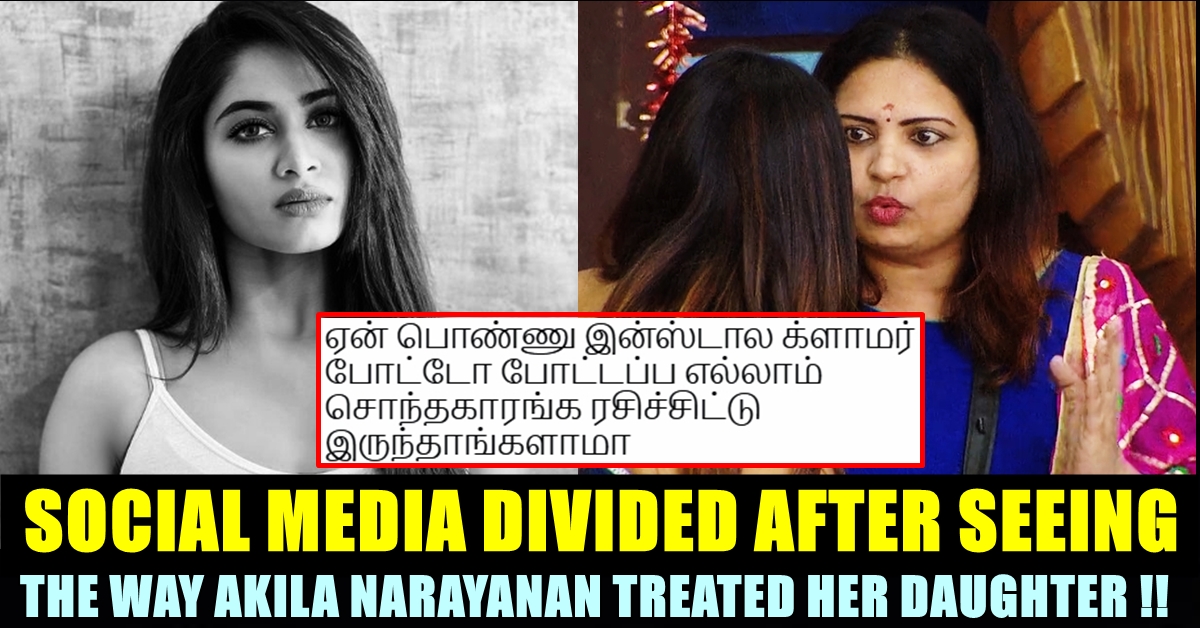 On seeing the way Akila Narayanan treated her daughter inside the BIGG BOSS house, viewers of the show started reacting in various ways. In the most familiar freeze task, Shivani’s mother entered the Bigg Boss house only to condemn her daughter for the way she lived inside the house. Though Shivani requested her mother not to talk that way, Akila continued expressing her frustration over Shivani on air which made the 19 year old to shed tears.

The episode grabbed special attention from the viewers of the cash-rich show and reactions are pouring from all the directions of social media platforms. While a number of people in social media including director C.S Amudhan, Film critic Sudhir Srinivasan disagreed with the mother’s behaviour, many said that what Shivani’s mother did was a right thing. They said that the mother is trying to guide her mother in a right path.

However, few of them questioned why she allowed her daughter to upload pictures in Instagram when she is concerned about the views of the public and relatives. After entering the house, Shivani’s mother who looked emotional, questioned her why she entered the house. “Are you thinking that no one can see what you are doing in this house ?” she asked her daughter. Shivani who got puzzled, asked “What happened Maa?”

Responding to her, the mother asked whether she entered the house to roam behind a man. “Shut your mouth !! I will slap you” her face could be seen turning red. “Why are you keep following his words ? Is this your individuality ? Why are you boasting that you are being yourself ? Is roaming behind him means you are being yourself ?” she questionned by mentioning Balaji Murugadoss.

“Your Father is watching the show the relatives are watching it from our native. What would they think ??” she asks. “Why can’t you give the Christmas gift to any of the girls in this house ? What is that obsession of yours towards Balaji ?” she further questions. “I never saw you playing the game other than roaming behind him” she further said.

Sudhir Srinivaasan, a film critic said that Shivani’s mother could have concerned about her daughter as much as she is concerning about the views of the world whereas director C.S Amudhan said that the content Vijay TV telecasted is a “Toxic Parental Abuse”

So, this recent episode of #BiggBossTamil. Heart goes out to Shivani (and every child who's ever faced such abuse). Wish someone had stepped up to support her–and asked her mother to behave.

Ok. Just happened to watch the Big Boss episode. That was clearly normalising extremely toxic parental abuse. No..No come on that’s not acceptable content at all.

The most arrogant attitude was telecasted on Bigg boss. Shivani didn't do any crime. She shared her time with Balaji.. that's all. How did you degrade a girl becouse of this…#Shivani #bigbosstamil4 pic.twitter.com/9m289OMSVe

I’m sorry but Shivani doesn’t deserve this. She has been very decent. Why aunty 😔 #BiggBossTamil4

I'm shaking watching the show. on the one hand shivani's mom's outburst looks scripted but at the same time I feel like I'm the one who took all of those scoldings. mixture or not, nobody deserves such treatment on national television. #BiggBossTamil4

Meanwhile, a number of people appreciated the way Akila Narayanan condemned her daughter. They felt that she is the one who knows about the criticisms her daughter is receiving due to her behaviour inside the house.

As her mom, her emotions/feelings are right…#biggbosstamil #Biggbosstamil4

But #shivani Mother is 🔥. Such a Bold and Respectful!

Where was #Shivani's mom when she was in Instagram?
She broke that poor girl, She is just 19… 😐🤷‍♀
This is too harsh… #BiggBossTamil4 #BiggBossTamil #BiggBoss4Tamil

According to #Shivani mom
This is This is
Right wrong 🤧 pic.twitter.com/6oD8NuZ6zp

It is high time for these fans to realize that clothing has nothing to do with the character of an individual. Comment your views !!

“We Fans Are Ready To Give One Day From Our Lifetime To Our Thalaivar” – Filmmaker
“Never Seen Him This Happy” – Prithi Ashwin !!