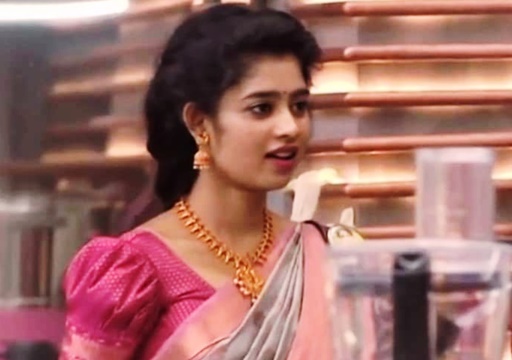 A video of Janani talking to Amudhavanan in a husky voice without wearing her mic, made netizens to call her out questioning whether audience are being taken for granted. In the video which is doing rounds in social media platforms, the news reader could be seen talking with Amudha Vanan during night time without wearing her mic.

Janani’s eye candy expressions and unique Tamil gained her enough population among the Tamil television audience to keep her inside the house by voting for her. She never came under scanner among the Bigg Boss audience for her behaviour or the way she interacts with her co-contestants.

For the first time, the 21 year old became a subject to severe online criticism after talking to her co-contestant Amudha Vanan without wearing her mic. Many other viewers could be seen complaining about the way she speaks to the housemates as it couldn’t be understood most of the times.

“Don’t know why #Janani and #Amudhu are doing this. if KH doesn’t warn them, it simply shows VJ TV is protecting their face. They did a big hoopla around Ayesha and Sherina talking Malayalam” a user commented on seeing the video whereas another one said “not wearing the mic is against the rules of big boss house . as a subscriber/audience , I’ll ask the Violations”

Check out some of the reactions that surfaced from audience surrounding Janani below :

Don’t know why #Janani and #Amudhu are doing this. if KH doesn’t warn them, it simply shows VJ TV is protecting their face. They did a big hoopla around Ayesha and Sherina talking Malayalam . #BiggBossTamil6 https://t.co/e4r3crJ3gX

not wearing the mic is against the rules of big boss house .

as a subscriber/audience ,
I’ll ask the Violations.

#BiggBossTamil6
Malayalam pesinathuku evicted; sonna ppl come here..!!
Look that this?!
I am not justifying speaking in M is right! Same time not condemning these or few speaking alwayz in English looks high partial.. https://t.co/Jdp8DELpTS

if speaking malayalam is wrong, then speaking without mic is equally wrong too!

not only Jan & Amudha but to all those HMs who fail to follow the rules.. what is WRONG w yall? 🙄 #BiggBossTamil6 https://t.co/KRMI3Rw0uT

Will they be questioned and given a strict reprimands?

Oops sorry we won’t because #Amudhavanan is VTV product and mam is a channel favourite 🥰🥰#BiggbossTamil6 https://t.co/YcEm8yoDCE

Appreciated @ikamalhaasan when he told #VJKathiravan #Queency #Ayesha to use mic rightly.

From Harbhajan Singh To Actor Siddharth, Here’s How Everyone Praying For Neasamani !!

Not only meme creators, the storm of Neasamani hit celebrities from the Kollywood industry as well. The hilarious posts helped many people to laugh...